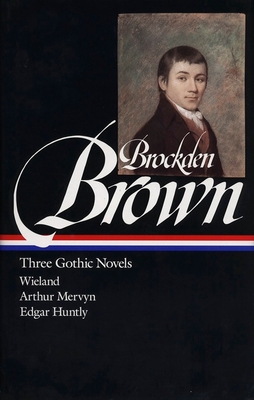 An elderly mystic dies of spontaneous combustion in a secret temple. A young man is haunted by voices instructing him to slaughter his wife and children. A sleepwalker undergoes a series of violent adventures in the wilderness.

These haunted, dreamlike scenes define the fictional world of Charles Brockden Brown, America’s first professional novelist. Published in the final years of the eighteenth century, Brown’s startlingly prophetic novels are a virtual résumé of themes that would constantly recur in American literature: madness and murder, suicide and religious obsession, the seduction of innocence and the dangers of wilderness and settlement alike.

In Three Gothic Novels, The Library of America collects the most significant of Brown’s works. Wieland; or The Transformation (1798), his novel of a religious fanatic preyed upon by a sinister ventriloquist, is often considered his masterpiece. A relentlessly dark exploration of guilt, deception, and compulsion, it creates a sustained mood of irrational terror in the midst of the Pennsylvania countryside.

In Arthur Mervyn; or Memoirs of the Year 1793 (1799), Brown draws on his own experience to create indelible scenes of Philadelphia devastated by a yellow fever epidemic, while telling the story of a young man caught in the snares of a professional swindler.

Edgar Huntly; or Memoirs of a Sleep-Walker (1799) fuses traditional Gothic themes with motifs drawn from the American wilderness, in a series of eerily unreal adventures that test the limits of the protagonist’s self-knowledge.

All three novels reveal Brown as the pioneer of a major vein of American writing, a novelist whose literary heirs include Poe, Hawthorne, Faulkner, and the whole tradition of horror and noir from Cornell Woolrich to Stephen King.

This volume also includes a newly researched chronology of Brown’s life, explanatory notes, and an essay on the texts.

“An important and long-overdue homage to one of the milestone figures of our early literary history.” —Kirkus Reviews

Charles Brockden Brown (1771-1810) was the early republic's most ambitious and accomplished literary figure, writing prolifically in many genres.

Sydney J. Krause, volume editor, is professor emeritus of English at Kent State University, and general editor of the Kent State University Bicentennial Edition of the multi-volume Novels and Related Works of Charles Brockden Brown.
Loading...
or
Not Currently Available for Direct Purchase