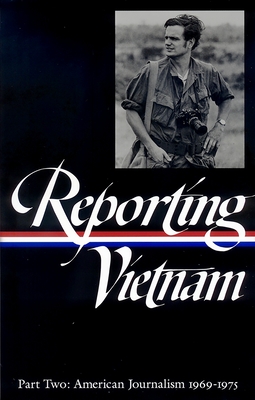 Reporting Vietnam Part Two: American Journalism 1969–1975, along with its companion volume, captures the bravery, fear, cruelty, suffering, anger, and sorrow of a tragic conflict. This second volume traces events from the revelation of the My Lai massacre in 1969 through the fall of Saigon in 1975. Here are Peter Kann on the ambiguities of pacification; Gloria Emerson on the South Vietnamese debacle in Laos; Donald Kirk on declining American morale; Sydney Schanberg on the fall of Phnom Penh and the victory of the Khmer Rouge; Philip Caputo, Keyes Beech, Peter Arnett, and Malcolm Browne on the last days of South Vietnam.

Included in full is Dispatches, journalist Michael Herr’s acclaimed impressionistic memoir of his immersion in the exhilaration, dread, and sorrow of the Vietnam War.

“I could quote these pieces forever. They are remarkable, and The Library of America has again produced a tremendous collection.” —American Journalism Review