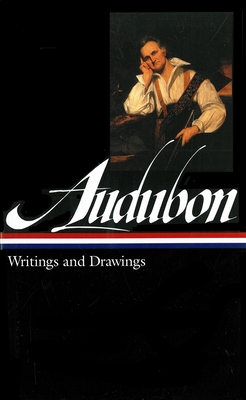 The breathtaking art of John James Audubon’s Birds of America has been celebrated throughout the world since it first appeared over 150 years ago. Less well known is Audubon’s literary legacy: the magnificent volumes of natural history he published during his lifetime, as well as the remarkable journals, memoirs, and letters left behind at his death. In this unprecedented collection from The Library of America, Audubon the great nature writer takes his rightful place alongside Audubon the artist.

Here is the most comprehensive selection of Audubon’s writings ever published, along with a spectacular portfolio of his drawings. The “Mississippi River Journal,” the foremost record of an American artist’s progress, details Audubon’s first wilderness bird hunts; it is as fresh in its perceptions of the scenes and characters of the old South as of the forest and its creatures. Selections from his “1826 Journal” follow Audubon to Europe, where after years of relative obscurity and financial distress his abilities were finally recognized. Audubon’s masterwork, the five-volume Ornithological Biography, is represented here by forty-five entries. Charming, haunting, and violent by turns, these vivid intimate portraits of the habits and habitats of American birds changed American nature writing forever.

In the “Missouri River Journals,” Audubon evokes the vanishing American Indian and the hardships of frontier life. An extensive selection of letters charting twenty years of Audubon’s artistic development, along with two essays on artistic technique and a brief memoir, round out the volume. Whenever possible, texts have been painstakingly prepared from original sources, without censorship or modernizing revision, constituting a major contribution to Audubon scholarship. Detailed general and ornithological indexes aid the reader in the field as well as in the study.

Sixty-four full-color plates and several manuscript sketches, some never before published, offer a unique perspective on Audubon’s art. Including original watercolors, aquatint engravings and lithographs, they reveal the evolution of his compositions and the effects of his collaborations with his publishers in ways never before seen.

John James Audubon (1785-1851) was an ornithologist, naturalist, writer, and painter. His major work, an ambitious color-plate book entitled The Birds of America (1827–1839), is considered one of the most significant ornithological works ever published.
Loading...
or
Not Currently Available for Direct Purchase