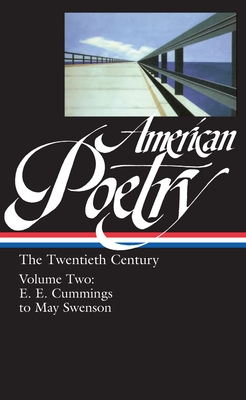 “The editing is more than brilliant: It is nearly unimaginable how the Library of America team managed to do so much so well. . . . Every possible kind of poem is here in its best examples. No one has ever done a better anthology of modern American poetry, or even come close.” — Talk

This second volume of the landmark two-volume Library of America anthology of twentieth-century poetry, organized chronologically by the poets’ birthdates, takes the reader from E.E. Cummings (1894–1962) to May Swenson (1913–1989). In the wake of the modernist renaissance, American poets continued to experiment with new techniques and themes, while the impact of the Depression and World War II and the continuing political struggle of African Americans became part of the fabric of a literature in transition. New schools and definitions of poetry seemed often to divide the literary scene. This was the era of the Harlem Renaissance, the Objectivists, the Fugitives, the proletarian poets. It was also an era of vigorously individuated voices—knotty, defiant, sometimes eccentric.

The range of tone and subject matter is immense: here are Melvin B. Tolson’s swirlingly allusive Harlem portraits, Phyllis McGinley’s elegant verse transcriptions of suburbia, May Swenson’s playful meditations on the laws of physics. The diversity of formal approaches includes the extreme linguistic experiments of Eugene Jolas and Abraham Lincoln Gillespie, Rolfe Humphries’s adaptation of traditional Welsh meter, the haiku of Richard Wright, the ballads of Helen Adam and Elder Olson, the epigrams of J.V. Cunningham. A selection of light verse is joined by lyrics from the era’s greatest songwriters, including Robert Johnson, Woody Guthrie, and Ira Gershwin. Several important long poems are presented complete, including Hart Crane’s The Bridge, Louis Zukofsky’s Poem beginning “The” and Robert Penn Warren’s Audubon: A Vision. Rounding out the volume are such infrequently anthologized figures as Vladimir Nabokov, James Agee, Tennessee Williams, and John Cage.

Robert Hass is one of America's most acclaimed poets, winner of both the National Book Award and the Pulitzer Prize. He was poet laureate of the United States from 1995 to 1997.

John Hollander (1929–2013) published nearly two dozen books of poetry, including Selected Poetry (1993), Figurehead (1999), and A Draft of Light (2008), as well as five books of criticism. He received the Bollingen Prize and a MacArthur Fellowship, and was Sterling Professor of English at Yale University.

Carolyn Kizer (1925-2014) was the author of more than a dozen works of poetry, prose, and translation. She won the Pulitzer Prize for Poetry in 1985.

Nathaniel Mackey is a poet, novelist, anthologist, literary critic, and editor. He is the Reynolds Price Professor of Creative Writing at Duke University and a Chancellor of The Academy of American Poets.

Marjorie Perloff teaches courses and writes on twentieth and twenty-first century poetry and poetics. She is Professor Emerita of English at Stanford University and Florence R. Scott Professor of English Emerita at the University of Southern California.
Loading...
or support indie stores by buying on