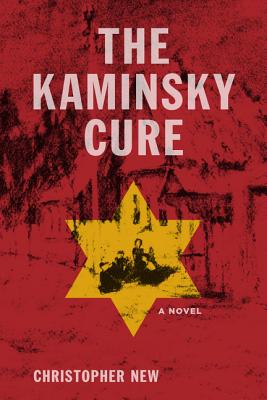 The Kaminsky Cure is a poignant yet comedic novel of a half Jewish/half Christian family caught up in the machinery of Hitler’s final solution. The matriarch, Gabi, was born Jewish but converted to Christianity in her teens. The patriarch, Willibald, is a Lutheran minister who, on one hand is an admirer of Hitler, but on the other hand, the conflicted father of children who are half-Jewish. Mindful and resentful of her husband’s ambivalence, Gabi is determined to make sure her children are educated, devising schemes to keep them in school even after learning that any child less than 100% Aryan will eventually be kept from completing education. She even hires tutors who are willing to teach half-Jewish children and in this way comes to hire Fraulein Kaminsky who shows Gabi how to cure her frustration and rage: to keep her mouth filled with water until the urge to scream or rant has passed.

This beautifully rendered novel of WWII, “seen through a child’s eye, makes delusion and hypocrisy shockingly stark.” (The Guardian)


Praise For The Kaminsky Cure…

“The Jewish mother Gabi, a tempest of energy that exhausts while it saves...Sara, the burdened, responsible child...the local Nazi official, more ambitious than vicious...the housekeeper, obstinate and loyal...Christopher New brings them to life.”
— Literary Review

“Christopher New is equally at home in both Asia and Europe. His eastern novels range over Hong Kong, China, India and Egypt during the rise and fall of the British presence in the Middle and Far East, while The Kaminsky Cure is set in Austria during the Third Reich.”
— Eastern Economic Review

“In his mixture of sophistication and inexperience, the narrator of The Kaminsky Cure owes a debt to the famously idiosyncratic narrator of Martin Amis’s 1991 novel Time’s Arrow, which is told backwards by the soul of a Nazi doctor – a soul that wishes to exonerate itself of any knowledge of atrocity… this novel’s consistent viewpoint and wry tone make it surprisingly engaging.”
— Jewish Quarterly

“Beautifully written…poignant…memorable. The author brings to life the characters in a truly commanding manner and the writing is sharp, clear and humorous, despite the decidedly unfunny subject matter."
— Australia Jewish News

“With "Life is beautiful" Roberto Benigni gave a cinematic answer to the question [whether one can laugh about the Holocaust]. In literature it could be Christopher New.”
— Deutschland Radio

Christopher New was born in England and educated at Oxford and Princeton. He is the author of many books, among them The China Coast Trilogy, (the New York Times Bestseller, Shanghai, The Chinese Box, A Change of Flag). These novels have been described as “the definitive account of the British Presence in furthest Asia, and “a literary feat of the highest quality,” and have been widely translated. Formerly the head of the Philosophy Department at the University of Hong Kong, Christopher New is the author of The Philosophy of Literature. He divides his time between Bankok and Berlin.
Loading...
or
Not Currently Available for Direct Purchase