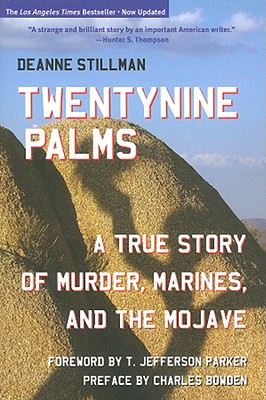 A True Story of Murder, Marines, and the Mojave

Twentynine Palms is a compelling account of the devastating murder of two young girls by a troubled Marine in the rural California desert town of Twentynine Palms. More than just a murder-mystery, Twenty-nine Palms is a passionate dissection of desert life itself. With the desert as a main character, Deanne traces the family histories of the murder victims back for generations, in one case to the Donner Party and the other to a shack in the Philippines, and then, the inevitable and fatal arrival of each family in the Mojave. Her focus is the world of rootless kids who live in the shadows of a giant military base on the edge of the modern American frontier. The Mojave becomes a character for Stillman, as powerful and immediate as any of the actors in this real-life drama. The first edition of Twentynine Palms was a Los Angeles Times bestseller, and was named one of the best books of 2001 by the Los Angeles Times Book Review.

Originally from Ohio, Deanne Stillman has long been torn between two lovers. For a while, she consorted with her first, New York. Then, she decided to explore the West Coast, whereupon she took up with Los Angeles and the beach and the desert and all the sand that it has to offer.