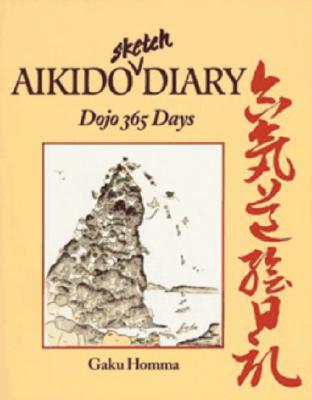 In Aikido Sketch Diary: Dojo 365 Days, Gaku Homma introduces his readers to the annual round of events at the Nippon Kan dojo, where the new member has the opportunity to practice in daily activities the spirit of Aikido "beyond the mat." The section on uchideshi training describes goals and difficulties that lie along the path of any discipline. This book illustrates the basic Aikido belief that students learn and progress only by doing things for themselves.

"The practice of martial arts is the practice of the development of human communication. I was surprised to find in the United States the traditional training methods at Nippon Kan, especially in its uchideshi program, its commitment to public service anf involvement with the community. I highly recommend this enjoyable book!"
- Shigeru Kawabe, Kancho

"Aikido Sketch Diary shows that the ultimate destination of the uchideshi or live-in student is not "the secret of ki power" or "the ability to vanquish any opponent." The student learns that the real goal is practice itself, the gradual awareness of one's surroundings, and the appreciation of the present that attention to duty brings."
- George Blankenship

Gaku Homma, founder and chief instructor of Nippon Kan, is the author of Aikido for Life, The Folk Art of Japanese Country Cooking, and Children and the Martial Arts: An Aikido Point of View. He has practiced under Morihei Ueshiba, the founder of Aikido, as well as other high-ranking instructors.
Loading...
or
Not Currently Available for Direct Purchase