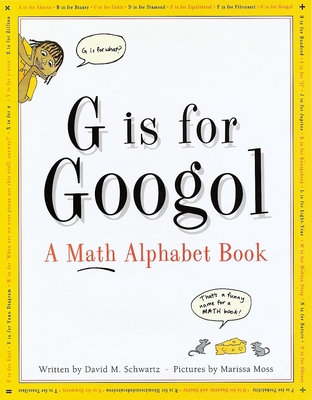 G Is for Googol

B is for Binary, F is for Fibonacci, P is for Probability... even a small sample begins to give you the idea that this is a math book unlike any other. Ranging freely from exponents to light-years to numbers found in nature, this smorgasbord of math concepts and trivia makes a perfect classroom companion or gift book for the budding young mathematician at home. Even the most reluctant math student will be drawn in by the author's trademark wit, Marissa Moss's quirky illustrations and funny captions, and the answers revealed in W is for " When are we ever gonna use this stuff, anyway?" Download the G is for Googol Teacher's Guide(300K)

Praise For G Is for Googol: A Math Alphabet Book…

"An enchanting alphabet book that will make its audience laught out loud....A terrific title to instruct and entertain." School Library Journal, Starred Review

"An asset to anyone who wants to make science fun." – starred review Library Talk magazine

"Will appeal to curious readers . . . who like to laugh while learning." – Sacramento Bee

DAVID SCHWARTZ is the author of 50 children's books, including G IS FOR GOOGOL and Q IS FOR QUARK. He is a frequent guest speaker at schools in the US abroad. He lives with his wife-and co-author-YAEL SCHY in Oakland, California.
Marissa Moss was an honors math student and the only girl on her school math team. She is the creator of the Amelia's Notebook Series, RACHEL'S JOURNAL, and REGINA'S BIG MISTAKE, among others. She lives in Berkeley, CA.
Loading...
or
Not Currently Available for Direct Purchase