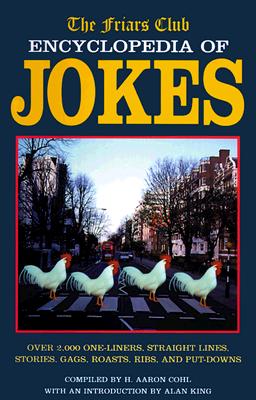 Need a laugh? How about 2000 of them? Hundreds of the world's best comedians provide jokes for every occasion and situation --lightbulb jokes, "he's so dumb . . . " jokes, mother-in-law jokes, dirty jokes, really dirty jokes, and more! Organized alphabetically by topic, the collection is perfect for browsing, searching for ice-breakers and pick-up lines, spicing up toasts, or adding a dose of humor to public speeches.

H. Aaron Cohl is the author of four books including Animal Wisecrackers and Are We Scaring Ourselves to Death?

Since 1904 the Friars Club has been wining and dining the top personalities of the times. From ribald comedy to musical merrymaking, the Friars have spent a century cultivating a tradition of top-tier humor that has spanned many generations and spawned millions of laughs.
Loading...
or
Not Currently Available for Direct Purchase