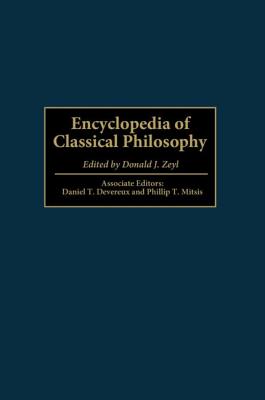 The Encyclopedia of Classical Philosophy is a reference work on the philosophy of Greek and Roman antiquity. It includes subjects and figures from the dawn of philosophy in Ionia in the 6th century BC to the demise of the Academy in Athens in the 6th century AD. Scholarly study of the texts and philosophical thought of this period has been, during the last half of the 20th century, amazingly productive and has become increasingly sophisticated. The 269 articles in the encyclopedia reflect this development.

While the majority of the articles are devoted to individual figures, many of the articles are thematic surveys of broad areas such as epistemology, ethics, and political thought. Some articles focus on particular concepts that evoked significant philosophical treatment by the ancients, and have proved central to later thought. Other articles treat fields that are no longer considered part of philosophy proper, such as mathematics and science. There are articles examining areas of intellectual or cultural endeavour, such as poetry or rhetoric, or genres of philosophical expression, such as dialogue and diatribe. Still others describe the historical developments of philosophical schools and traditions. The encyclopedia includes a chronology and guide to further reading. Best Reference Source