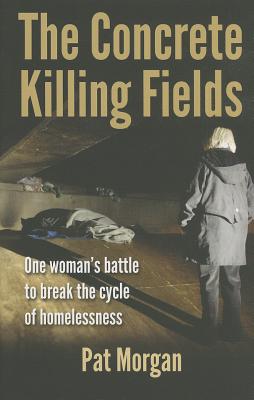 One Woman's Battle to Break the Cycle of Homelessness

The Concrete Killing Fields, One Woman's Battle to Break the Cycle of Homelessness is a multiple award-winning book, taking Bronze medals in Foreword Reviews 2014 INDIEFAB Book of the Year Awards and in Independent Publishers IPPY 2015 Book of The Year Awards. This fascinating, funny, mesmerizing, yet motivating and inspiring memoir also placed second in the National Federation of Press Women's 2016 national competition in their non-fiction book category. At the heart of The Concrete Killing Fields are the stories about the homeless people who stole the author's heart, broke it, and sent her on a wildly improbable but wildly successful journey to the nation's capital in search of a more effective way to help them. But The Concrete Killing Fields is also the story of Pat Morgan, a gutsy real estate broker, former banker, and former elected official in county government (occupations not necessarily noted for altruistic motives), who answered the call from the concrete killing fields of homelessness-and found her calling. As a volunteer, listening for five years to the stories of the "street people" in the basement offices of a historic downtown church in Memphis, and doing everything she could do to help them, she knew she was where she was supposed to be, finally doing what God intended for her to be doing with her life. But because it was never enough for them, it wasn't enough for her. Five years later, devastated by the rising "body count," and frustrated with the lack of resources to help those with the greatest needs for mental health treatment, services and housing, she set out on that wildly improbable journey. It would take her back to college, and, in a leap of faith (mixed with some gut-level, well-honed political instincts), on to American University in Washington, DC and an internship in the office of Senator Al Gore. When Arkansas Governor Bill Clinton, the man who'd inspired her to do more than she'd ever thought a girl from Turrell, Arkansas (pop.543) could ever do, announced that he was running for President, she quit the full-time job she'd just taken at the Peace Corps (only to be sure she could pay her rent on time). That action took her back to "temping" at temporary jobs all over DC so she could volunteer on Clinton's campaign. Driven by the memories of the "street people" she'd left behind, and the sure knowledge that Clinton cared deeply about the people she cared about, she immediately began volunteering on the Clinton for President campaign. Her volunteer work as an "Arkansas Traveler" on the snowy streets of New Hampshire and in the Washington Operations Office of the campaign soon led to a full-time job on the campaign. Her stories about the campaign, her work in the Office of the Presidential Transition that followed Clinton's election, and her work as a presidential appointee to the staff of the U.S. Interagency Council on Homelessness, then a working group of the White House Domestic Policy Council and still the pinnacle of power on policies to address homelessness, offer a glimpse into a world that most people never know about. Still, it was the memories of the homeless people she'd loved and lost to the concrete killing fields that would lead to the healing she hadn't even known she needed-and an inspiring end to this book.