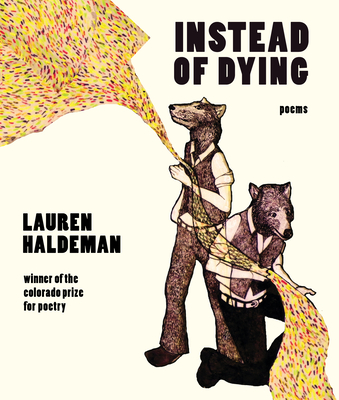 Instead of Dying (Colorado Prize for Poetry)

Invoking spiders and senators, physicists and aliens, Lauren Haldeman’s second book, Instead of Dying, decodes the world of death with a powerful mix of humor, epiphany, and agonizing grief. In the spirit of Calvino’s Invisible Cities, these poems compulsively imagine alternate realities for a lost sibling (“Instead of dying, they inject you with sunlight & you live” or “Instead of dying, you join a dog-sledding team in Quebec”), relentlessly recording the unlived possibilities that blossom from the purgative magical thinking of mourning. Whether she is channeling Google Maps Street View to visit a scene of murder (“Because / a picture of this place is / also a picture of you”) or investigating the origins of consciousness (“Yes, alien / life-forms exist / they are your thoughts”), Haldeman wrenches verse into new sublime forms, attempting to both translate the human experience as well as encrypt it, inviting readers into realms where we hover, plunge, rise again, and ascend.

Praise For Instead of Dying (Colorado Prize for Poetry)…

“Each of the seven sections of Instead of Dying delivers singular shocks and unanswerable questions. Guided by great figures in the history of science, these poems court the mystery lying beyond the precision of language and symbols in ‘the spell of the world pouring down.’ Lauren Haldeman’s writing opens us toward the work of mourning. Did I say work? Rather call it song.”
—Susan Howe

“With an extraordinarily light touch, Lauren Haldeman glides us through the peregrinations of grief and delight with a revivifying play and formal resourcefulness. Instead of Dying shows us that whimsy, that the imagination sustains life.”
—Dean Young

“In this searing book, Lauren Haldeman designs a series of intricate afterlives for her lost brother, braiding these memorials with poignant lyrics that chart the personal outlines of grief. Haldeman offers these poems as acts of generosity, but be warned: her ‘crystalline path’ is a sharp one, to be walked not by the dead, but by those left behind to make sense of loss. Instead of Dying is part elegy, part star map, part book of cures. Here, the body may be healed by syringes filled with sunlight, by secret walks in the woods, and above all, by language itself, which emerges, powerfully, to move us toward the light of forgiveness even in our darkest hour.”
—Kiki Petrosino

"While this collection might write through grief and her brother’s death, I wouldn’t call this a book about those subjects, instead directing the energy and impulses of grief to explore what might not have been otherwise reached. This is a difficult book, and it is meant to be, unapologetically so, albeit writing one that writes not a darkness but occasionally from a dark place, seeking and searching for answers that might not entirely be possible."
—
rob mclennan's blog

Lauren Haldeman is the author of the poetry collection Calenday and chapbook The Eccentricity Is Zero. Her work has appeared or is forthcoming in Tin House, Fence, the Iowa Review, and the Rumpus. A comic book artist, illustrator, and poet, she has taught in the United States as well as internationally. She is a graduate of the Iowa Writers’ Workshop.
Loading...
or
Not Currently Available for Direct Purchase