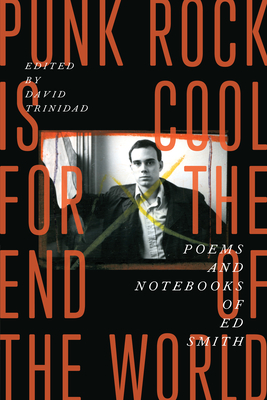 Punk Rock Is Cool for the End of the World (Paperback)

Poems and Notebooks of Ed Smith

In Punk Rock Is Cool for the End of the World, David Trinidad brings together a comprehensive selection of Ed Smith's work: his published books; unpublished poems; excerpts from his extensive notebooks; photos and ephemera; and his timely "cry for civilization," "Return to Lesbos" put down that gun / stop electing Presidents.

Ed Smith blazed onto the Los Angeles poetry scene in the early 1980s from out of the hardcore punk scene. The charismatic, nerdy young man hit home with his funny/scary off-the-cuff-sounding poems, like "Fishing" This is a good line. / This is a bad line. This is a fishing line.

Ed's vibrant "gang" of writer and artist friends--among them Amy Gerstler, Dennis Cooper, Bob Flanagan, Mike Kelley, and David Trinidad--congregated at Beyond Baroque in Venice, on LA's west side. They read and partied and performed together, and shared and published each others' work.

Ed was more than bright and versatile: he worked as a math tutor, an animator, and a typesetter. In the mid-1990s, he fell in love with Japanese artist Mio Shirai; they married and moved to New York City. Despite productive years and joyful times, Ed was plagued by mood disorders and drug problems, and at the age of forty-eight, he took his own life.

Ed Smith's poems speak to living in an increasingly dehumanizing consumer society and corrupt political system. This "punk Dorothy Parker" is more relevant than ever for our ADD, technology-distracted times.

Ed Smith (1957-2005) was a poet involved in the punk and alternative arts scenes in Los Angeles in the early 1980s. His books were Fantasyworld (1983) and Tim's Bunnies (1988). His poems appeared in Rolling Stone, St. Mark's Poetry Project Newsletter, and other publications. Smith also worked as an animator on Nickelodeon's Blue's Clues. David Trinidad is the author of more than twenty books of poetry, collabora-tions, and edited volumes. These include Swinging on a Star (2017), Notes on a Past Life (2016), Dear Prudence: New and Selected Poems (2011), and Plasticville (2000), finalist for the Lenore Marshall Poetry Prize. Trinidad is editor of A Fast Life: The Collected Poems of Tim Dlugos (2011), which won a Lambda Literary Award. He is a professor of poetry in the English and Creative Writing Department at Columbia College, Chicago.
or
Buy Here
Copyright © 2020 American Booksellers Association