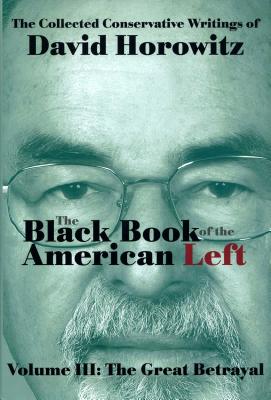 The Black Book of the American Left Volume 3

Intellectually provocative and forcefully argued, Volume 3 of The Black Book of the American Left shows why David Horowitz is the worst enemy of the Left and a national treasure for conservatives.

In The Great Betrayal, Horowitz focuses on events from 9/11 to the Iraq War. The essays chronicle how efforts to remove the Saddam regime, initially supported by both major political parties, were cynically abandoned by the Democratic Party whose leaders then conducted a five year campaign against the war while American troops were still on the battlefield.

These politicians were, Horowitz shows, acting in concert with "progressives" who, without overtly supporting the Saddam regime as their political ancestors had the Kremlin, were nonetheless resuming the left’s historic role as frontier
guards for the enemies of the United States.

DAVID HOROWITZ is a noted chronicler and opponent of the American Left, a conservative commentator, and a bestselling author. He is the founder and CEO of the David Horowitz Freedom Center in Los Angeles and the author of Radical Son, The Black Book of the American Left, and The Enemy Within.
Loading...
or
Not Currently Available for Direct Purchase