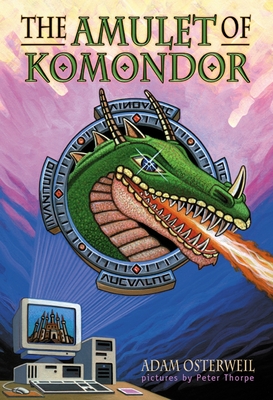 Like most middle-school kids, Joe and Katie are obsessed with their favorite fantasy card game, DragonSteel: The Amulet of Komondor -- a cross between Pokemon and Magic: The Gathering. When they find a computer game version of DragonSteel at a mysterious shop in the local mall, they jump at the chance to play it. But it turns out to be more than your average video game. Joe and Katie become the actual cartoonish characters of the game, journeying through the world of Komondor on a quest to find the five pieces of the DragonSteel amulet, which they need to save Komondor and Earth from three evil emperors. Using their skill with video games and the help of a colorful cast of new friends -- including an English Golem with a penchant for grammar and a doll-collecting baby prophet -- they take an exciting trip through Komondor and even deal with real-world problems concerning anxious parents, romance, and the FBI.

Adam Osterweil grew up in Plainview, NY. He attended college at Cornell University, where he majored in Classics, studying Greek and Roman literature, history, and language. Adam earned a Master of Arts from Stony Brook University, and is now a Junior High English teacher at Springs School in Springs, New York. His hobbies include treasure hunting, video games, and collecting comic books. This is his first book.

Peter Thorpe began drawing and painting at an early age. He studied commercial art at The California College of Arts & Crafts and from there moved to New York City, where he worked in the fields of editorial and advertising illustration. Upon discovering that he had a penchant for type design and layout, as well as for illustration, he began to specialize in book covers. Most notably, he has created book covers for over 40 editions of Tony Hillerman's mysteries and he created the cover for Garrison Keillor's best-selling Lake Wobegon Days. DragonSteel: The Amulet of Komondor is the first book for which Peter has created both the cover art and the interior illustrations. It is also the first book for children that he has worked on. Peter now lives in Asheville, North Carolina.
or
Not Currently Available for Direct Purchase
Copyright © 2020 American Booksellers Association