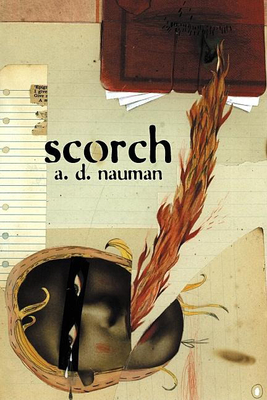 In the future world of Scorch, America is run by a corporacracy. Three conglomerates have taken control not by force but by manipulating common beliefs and values through the media, and particularly by playing on Americans fears of Big Brother. Consumerism and privatization have run amok in this landscape of flashing screens and subtle brainwashing, a world where even city streets and public schools are run by big business. This is a darkly comic first novel of a dystopian future, with echoes of 1984 and Brave New World.

A. D. Nauman's short fiction has appeared or is forthcoming in The Literary Review, Roanoke Review, Knee-Jerk, Other Voices, The Chicago Reader, and many other literary journals. She is the recipient of an Illinois Arts Council award for literary fiction and has had work produced by Stories on Stage. Her dystopian novel, Scorch, set in a near-future America governed by three huge corporations, can be found on Amazon and as an e-book. Nauman works as an education professor in Chicago, and lives in Oak Park with a highly pampered tuxedo cat.
Loading...
or
Not Currently Available for Direct Purchase