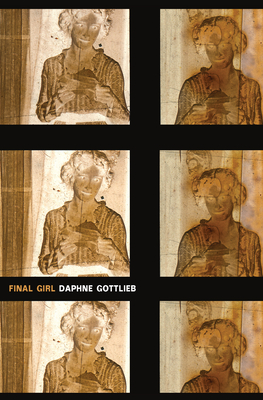 Final Girl — the last girl left alive in the syntax of the "slasher"— traces the history of the femme fatale in a sequence of poems and stories that display the verve and wit readers have come to expect from Gottlieb. In Final Girl Gottlieb is the survivor, the one who remains to tell the story: what was done to others, what was done to her, what might yet be done to her.
Sexy and tart, dark and comic, low-down and high-hearted poems such as Suture, Slash, Vamp, Bride of Reanimator and The Babysitter Gottlieb identifies and articulates the desires, fears, traumas, both personal and social, out of which pop culture is made…and then she feeds pop culture back to itself.
Though the slasher flick is central, Gottlieb finds resonances in sources as disparate as the early American captivity narrative, queer and feminist film theory, and her own mother’s death from breast cancer. Through such iconic American figures as Mary Rowlandson, Marilyn Monroe and Patty Hearst, Gottlieb delineates the ways in which we’re betrayed by our cultural fantasies about abduction, gender, literature, pleasure, and transgression—and, in so doing, synthesizes the death and life of the American female.

Daphne Gottlieb is the award-winning author of ten books including her recent collection of short stories, Pretty Much Dead. Previous works include Dear Dawn: Aileen Wuornos in her Own Words, a collection of letters from Death Row by the “first female serial killer” to her childhood best friend. She is also the author of five books of poetry, editor of two anthologies, and, with artist Diane DiMassa, the co-creator of the graphic novel Jokes and the Unconscious. She has relentlessly toured coast to coast, headlining solo tours as well as appearing with Hal Sirowitz, Lydia Lunch, and Maggie Estep. She has appeared at SXSW, Bumbershoot, and LadyFest Bay Area, and her poetry, fiction and essays have appeared in more than 50 anthologies.

Daphne is the winner of the Acker Award for Excellence in the Avant-Garde, the Audre Lorde Award for Poetry, the Firecracker Alternative Book Award, and is a five-time finalist for the Lambda Literary Award. She lives in San Francisco, where she is frequently seen with her three-pound, toothless, humpback chihuahua, Doomsday Honeymoon, nestled in her arms.
Loading...
or support indie stores by buying on