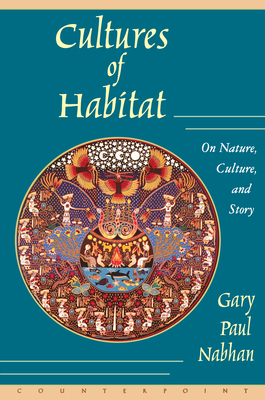 On Nature, Culture, and Story

A collection of essays explores the impact of indigenous cultures with stable communities on the conservation of biological diversity in natural habitats.

Ethnobotanist Gary Paul Nabhan provides 26 essays that go beyond mere observations of wildlife but offer theories of links between cultural and biological diversity. He champions a shift away from the preservation efforts of the mainstream environmental movement, rejecting the separateness of ecological preserves that exclude humans. Nabhan argues that biodviersity thrives best in the presence of an involved, participatory culture, and his argument is bolstered by research and years of field experiecne.

Gary Paul Nabhan is an Agricultural Ecologist, Ethnobotanist, Ecumenical Franciscan Brother, and author whose work has focused primarily on the interaction of biodiversity and cultural diversity of the arid binational Southwest. He is considered a pioneer in the local food movement and the heirloom seed saving movement.
Loading...
or support indie stores by buying on