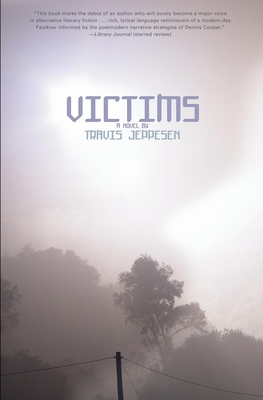 Victims (Little House on the Bowery)

Victims may by the most exciting first novel I've read in a decade or more. This is a brilliant, haunting, and, strangest of all, very funny novel.
--Dennis Cooper, -author of Frisk Victims is a novel about the final days of a religious cult called The Overcomers. Like the infamous Heaven's Gate cult, whose mass suicide gained world media attention in the 1990s, they are a small group of lost souls guided by the teachings of a charismatic leader, Martin Jones. The Overcomers go about their lives preparing for the cosmic event that will signal the end of their time on earth. Their struggles to reconcile their faith in Jones's teachings with the emotional ups and downs of their relationships, jobs and interactions with the natural world form the subject of this exquisitely written and highly original novel. Based on extensive research into the rhetoric of religious cults, Victims is a novel of ideas. Twenty-three-year-old author Travis Jeppesen uses an episodic narrative, an elegantly direct style and a quirky, sympathetic group of characters to ponder a question raised by Jones's teachings: If friendship and love are just systems to instill -comfort in our lives, are all human interactions acts of manipulation? Victims is set in a rural America of the imagination informed by classic American values--and cleansed of the mundane distractions that characterize American culture. Travis Jeppesen has written a novel with a philosophical bravura rarely seen in the work of contemporary American writers. Travis Jeppesen was born in Ft. Lauderdale in 1979. His fiction and cultural criticism have appeared in Book Forum, 3am Magazine, The Stranger and other publications, and he is a contributing editor to Pavement Magazine. Victims is his first novel. Jeppesen currently resides in an undisclosed Eastern European country.