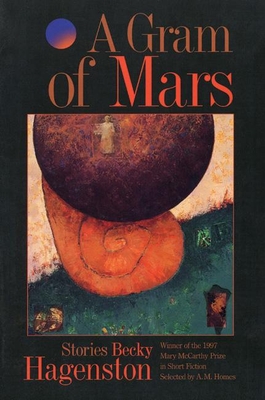 A Gram of Mars

Becky Hagenston's debut collection, A Gram of Mars was selected by A.M. Homes as the 1997 Winner of the Mary McCarthy Prize in Short Fiction, these stories portray the modern family as one that refuses to be fashionably dysfunctional. In the hyphenated, divorced, and step-parented context of the late twentieth century, Hagenston reminds us, it is the minister and his wife in a small town in Maryland who are unconventional. These stories, conveyed with spirited, conversational prose, prove that the meaning of family prevails. In Holding the Fort, a husband's infidelity dissolves his marriage but not the couple's emotional ties. And in A Gram of Mars, an adult daughter responds to her divorced father's anguish upon learning of his ex-wife's remarriage, and the whole fractured family reconvenes for an evening: Beside me, my father is breathing slow and regular as a child, and I wonder suddenly if he's fallen asleep. But his eyes are open, fixed on the road. For a moment, I believe I know what he's thinking-he has seen the woman he loves, and his daughter is beside him, and for now everything is just as simple as that. . . . When he sighs, I lean back in my seat and try to think of nothing. The sky vaults over us and silence settles down, like a pact we've made together, like a precious, immeasurable weight.

Hagenston manages, with subtle emotional logic, to turn the joke of the dysfunctional family on its head. As one character says, If something can begin millions of years ago on Mars and somehow, miraculously, find its way to my father-then why not something simpler, like happiness, which happens every day right here on earth?

Becky Hagenston grew up in Maryland and received her MFA from the University of Arizona. Her stories have appeared in or are forthcoming from such journals as TriQuarterly, Shenandoah, The Crescent Review, Antietam Review, Folio, Press, and Carolina Quarterly. One of her stories was included in Prize Stories 1996: The O'Henry Awards. She lives in Las Cruces, New Mexico.