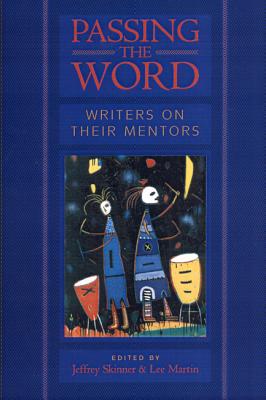 Writers on Their Mentors (Writer's Studio #3)

Discipline, humility, kindness. These qualities cohere in the best mentors, bundled into an overarching approach to the art of writing. It is not, I think, coincidence that the writers in this collection remember these qualities best when speaking of their mentors as people, as fellow pilgrims who helped them on the way. In some sense, whether consciously or not, we seek out mentors who learn how to live--as an artist, and as a human being.--from the Introduction by Jeffrey Skinner

Lee Martin is the author of a collection of stories, The Least You Need to Know (Sarabande, 1996), a memoir From Our House (Dutton 2000), and a novel Just Enough Haughty, also forthcoming from Dutton. He teaches in the creative writing program at the University of North Texas where he also edits the American Literary Review.

Jeffrey Skinner is currently Director of Creative Writing at the University of Louisville. His published collections of poetry include The Company of Heaven (University of Pittsburgh Press, 1992), Late Stars (Wesleyan University Press, 1985), and A Guide to Forgetting (Graywolf Press, 1988), which was a National Poetry Series selection.

INTRODUCTION: The Scrupulous Philanthropy of Expertise by Jeffrey Skinner, xi

JAY MCINERNEY
Raymond Carver: A Still, Small Voice, 15
Getting in Touch with Your Child, 24

DAVID HUDDLE
What about Those Good People?, 51
Backstory, 57