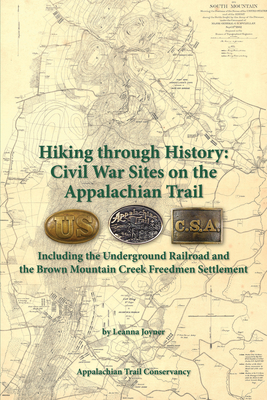 The ridges and valleys of the Appalachians once were the frontier of colonial America. Today their centerline is the Appalachian National Scenic Trail, a hiking and backpacking beacon to the world. In between, its route became one of many routes to freedom for the enslaved in the South and mid-Atlantic states and then a series of mountaintop battlefields. Some argue it began here, with John Brown's raid on the armory at Harpers Ferry, the psychological halfway point of the legendary footpath.

Hiking through History documents battle sites along the Trail from east Tennessee to the retreat lines from Gettysburg, Underground Railroad sites from Harpers Ferry north to Maine, and a singular Trailside network of farms bought postwar by former slaves in central Virginia, their ruins still visible. Each site is illustrated with period photographs and a suggested hike, complete with four-color map and detailed description.

In the four years of the Civil War, hundreds died atop denuded ridges along what is now a peaceful, forested path for recreatrion and reflection. The intent of this volume is to provide to hikers a sense of what happened here more than 150 years ago and provoke them to reimagine the scenery and think about their past as Americans.

Foreword by Brian B. King.

Leanna Joyner, who hiked the length of the Appalachian Trail in 2003, brought experience in publications and marketing to the Appalachian Trail Conservancy, where today she manages volunteer-based crew and other trail programs in Georgia, North Carolina, and Tennessee. As a consultant, she developed community-based programs for the ATC and researched this guide to Civil War sites along a footpath perhaps more legendary for hiking exploits than history.