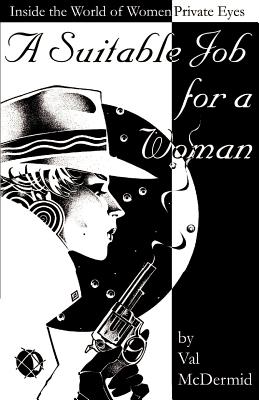 A Suitable Job for a Woman

Inside the World of Women Private Eyes

"But down these mean streets must go a man who is not himself mean, who is neither tarnished or afraid". When Raymond Chandler wrote these words in his classic The Simple Art of Murder, he drew a blueprint for the male private eyes who descend from Philip Marlowe to populate the world of crime fiction.

But what if the private eye is a woman? And what if she is not a character in a novel but a real, working investigator testing not only the meanness but the absurdity of life on seamy streets? Who will tell her story?

Enter Manchester's Val McDermid, herself a skilled writer of the P.I. novel but for years a professional journalist. In an effort to plumb the real world of working women -- and throw new light on her own craft -- she has interviewed women private eyes from both sides of the Atlantic and assembled their stories with an eye for the absurd and a keen grasp of the gritty nuts and bolts of the profession. As fascinating as fiction, A Suitable Job for a Woman is, in the words of Edgar-winning author Nevada Barr, "a concise and eye-opening trek through the competence, humor, and humanity of women".