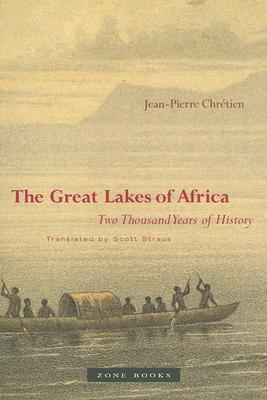 The Great Lakes of Africa

The first English-language publication of a major history of the Great Lakes region of Africa.

Though the genocide of 1994 catapulted Rwanda onto the international stage, English-language historical accounts of the Great Lakes region of Eastern Africa--which encompasses Burundi, eastern Congo, Rwanda, western Tanzania, and Uganda--are scarce. Drawing on colonial archives, oral tradition, archeological discoveries, anthropologic and linguistic studies, and his thirty years of scholarship, Jean-Pierre Chr tien offers a major synthesis of the history of the region, one still plagued by extremely violent wars. This translation brings the work of a leading French historian to an English-speaking audience for the first time. Chr tien retraces the human settlement and the formation of kingdoms around the sources of the Nile, which were discovered by European explorers around 1860. He describes these kingdoms' complex social and political organization and analyzes how German, British, and Belgian colonizers not only transformed and exploited the existing power structures, but also projected their own racial categories onto them. Finally, he shows how the independent states of the postcolonial era, in particular Burundi, Rwanda, and Uganda, have been trapped by their colonial and precolonial legacies, especially by the racial rewriting of the latter by the former. Today, argues Chr tien, the Great Lakes of Africa is a crucial region for historical research--not only because its history is fascinating but also because the tragedies of its present are very much a function of the political manipulations of its past.

Scott Straus is Assistant Professor of Political Science at the University of Wisconsin-Madison. He is the author of several books on Africa and violence, including The Order of Genocide: Race, Power, and War in Rwanda, and is the translator of Jean-Pierre Chretien's The Great Lakes of Africa: Two Thousand Years of History. Formerly a Nairobi-based journalist, he was nominated for a Pulitzer Prize for his 1996 reporting on the war in Congo.
Loading...
or support indie stores by buying on