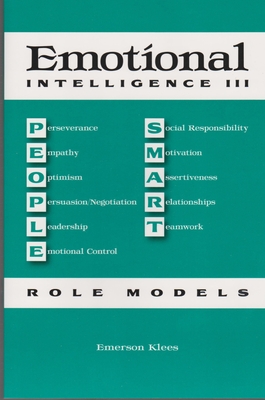 The purpose of this book is to illustrate the importance of people skills in achieving success, using role models from history. It is estimated that IQ contributes approximately 20 percent to success, leaving 80 percent to other factors, such as EQ. Traits that make up Emotional Intelligence, including self-control, empathy and perseverance, are factors that can be improved upon, unlike IQ, which remains relatively fixed from early childhood. Doing what you are good at and what you want to be doing are also important factors in being successful, in addition to recognizing our weaknesses and strengths and working hard.

Emerson Klees is the editor / publisher of Cameo Press. He is also the author of thirty books, half about New York State and the Finger Lakes Region and half collective biographies of role models of human values, such as perseverance, motivation, determination, resilience, and creativity.  He has a B.S. in electrical engineering, Penn State University, major: electronics, a M.B.A. from New York University, major: management, minor: statistics, and a M.A. in English literature (creative writing track) from the State University of New York at Brockport. For six years, he was an adjunct professor at the Rochester Institute of Technology College of Business teaching courses in entrepreneurship and business organization.