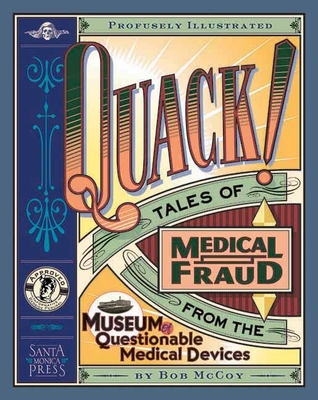 Tales of Medical Fraud from the Museum of Questionable Medical Devices

In Quack Tales of Medical Fraud from the Museum of Questionable Medical Devices, curator Bob McCoy shares his collection of the hilarious, horrifying, and preposterous medical devices that have been foisted upon the public in their quest for good health. From the Prostate Gland Warmer to the Recto Rotor, from the Nose Straightener to the Wonder Electric Generator, these implements reveal the desperate measures taken by the public in their search for magic cures. With period advertisements, promotional literature, and gadget instructions, this book offers a wealth of past--and present--medical fraud. For instance, you'll learn about: Albert Abrams, the King of Quackery, who believed that all that was needed from a patient for diagnosis was a drop of blood, a single hair, or even a handwriting sample as these would give off the unique vibrations of that individual. His theories were so popular that none other than Upton Sinclair promoted them in an article for Pearson's magazine.
Wilhelm Reich, the groundbreaking psychiatrist who, in the latter portion of his storied career, discovered Orgone--the energy supposedly released during sexual orgasm. According to Reich, absorbing large quantities of Orgone through his Orgone Energy Accumulator would make a person healthier.
Dr. Albert C. Geyser, whose Tricho machine for removing unwanted hair through x-ray depilitation resulted in thousands of women contracting hardened and wrinkled skin, receded gums, never-healing ulcerated sores, tumors, and, of course, cancer. And if you think quackery is a thing of a past, a sampling of late night television commercials advertising everything from fat burners to magnetic and/or copper pain relievers will cure you of that notion. In fact, in the mid-1990s, a product called The Stimulator was advertised on television as a cure for pain, menstrual problems, arthritis, and carpal tunnel syndrome. The commercial--featuring Evel Knievel as its spokesperson--was so effective that over 800,000 Stimulators were sold for $88.30 before the FDA shut the company down. Still, the owners made quite a hefty profit on what was simply a one dollar gas grill igniter.

Bob McCoy is the founder and curator of the Museum of Questionable Medical Devices in St. Anthony Main in Minneapolis. This is the nation's largest public display of quack medical devices and was founded in 1987. Mr. McCoy's past occupations include soap salesman, mill steel salesman, and family planning clinic administrator. He is a hobby printer, licensed humanist minister, and a member of the Committee for the Investigation of Claims of the Paranormal. It is as a skeptic that McCoy has worked to expose health fraud, and the museum is an entertaining and informative means of doing just that. He has been awarded the Special Citizenship award from the FDA for his work in exposing health fraud. McCoy is married with three grown children and five grandchildren.
Loading...
or
Not Currently Available for Direct Purchase