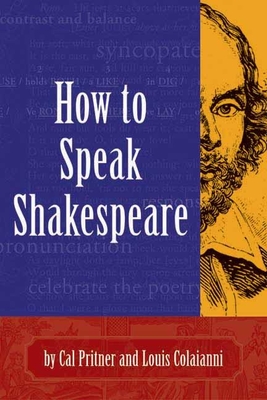 How to Speak Shakespeare

In "How to Speak Shakespeare," authors Cal Pritner and Louis Colaianni teach readers how to make sound and sense out of the Bard. Their methods have taught thousands of people--from high school students to English literature and theater arts graduate students, from beginning actors to professional actors--how to understand and effectively communicate the poetry of Shakespeare.
In order to make the book user-friendly, the authors have organized it around passages from Romeo and Juliet. The material has been tested successfully with high school students, graduate students, amateur actors, and professional actors. The authors' teaching method is essentially a simple three step process: Test Your Understanding, Stress for Meaning, and Celebrate the Poetry. Classroom and rehearsal-tested exercises are included along with additional background on Shakespeare and his work.

Cal Pritner, Ph.D., has chaired theatre departments at Illinois State University and the University of Missouri-Kansas City, and served as the founding artistic director of the Illinois Shakespeare Festival. Dr. Pritner has been inducted into the College of Fellows of the American Theatre. He lives in New York City. Louis Colaianni is an authority in voice, speech and Shakespeare performance. His innovative approach to phonetics and stage accents is used by dozens of theatre schools throughout the United States. He is an associate professor at the University of Missouri-Kansas City and has served on the faculties of the American Conservatory Theatre, Ohio University, and Hunter College among others. He lives in Kansas City, Missouri.
Loading...
or support indie stores by buying on