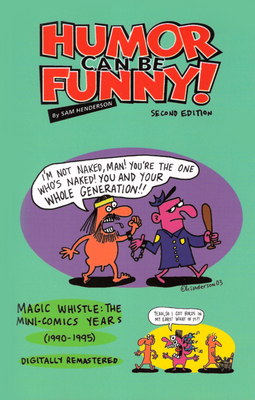 Humor Can Be Funny

Sam Henderson's early minicomics and self-published Magic Whistle comic all collected under one cover. Henderson's drawing is intentionally crude, but it has the same kind of energy you see in the work of today's best gag cartoonists, whose drawing also tends to be a little basic. Extremely low-brow humor that almost parodies low-brow humor - it's enjoyable on either level.

One of the funniest people in comics is Sam Henderson. Henderson's drawings have the same sort of energy and feel as the classic gag cartoonists, but with a far more twisted take on comedy -- extremely low-brow humor that almost parodies low-brow humor -- it's enjoyable on many levels. Join his regular cast of characters: Dirty Danny, The Brube, He Aims To Please, Robot Duckling, Monroe Simmons, and hundreds of others, for a unique and very funny comic book experience. Over the years Sam has contributed to many dozens of anthologies and produced the comic book Magic Whistle for over 20 years. Magic Whistle was nominated four years in a row for a Harvey Award for Special Award for Humor. His Scene But Not Heard comic appeared in every issue of Nickelodeon Magazine from 1996 to 2010. Scene But Not Heard was collected in a full-color hardcover edition by Alternative Comics and Top Shelf Productions in 2013. Sam was also an Emmy-nominated writer of Nickelodeon's SpongeBob SquarePants cartoon shows and the Scooby Doo comic book. His gag cartoons appear regularly in the curiously pink newspaper The New York Observer.
Loading...
or
Not Currently Available for Direct Purchase