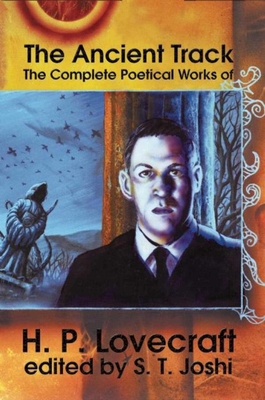 H. P. Lovecraft is best known for his fiction, but he spent a great portion of his creative energy on his poetry. The Ancient Track collects the complete poetry of one of the twentieth centuries most iconic writers. The great majority of these poems were written between 1914, and 1920, the period of Lovecraft's heaviest concentration on poetry.

Lovecraft's poetry may be regarded as the lesser of is literary output, but it merits collection precisely because it is an important ancillary to his other more well known forms of creative endeavor. Prior to the publication of The Ancient Track, Lovecraft's poetry had been scattered across several different volumes whose textual accuracy has not always been exemplary, while several poems had been uncollected.

There was no hand to hold me back
That night I found the ancient track
Over the hill, and strained to see
The fields that teased my memory.
This tree, that wall-I knew them well,
And all the roofs and orchards fell
Familiarly upon my mind
As from a past not far behind.
I knew what shadows would be cast
When the late moon came up at last
From back of Zaman's Hill, and how
The vale would shine three hours from now.
And when the path grew steep and high,
And seemed to end against the sky,
I had no fear of what might rest
Beyond that silhouetted crest.
Straight on I walked, while all the night
Grew pale with phosphorescent light,
And wall and farmhouse gable glowed
Unearthly by the climbing road.
There was the milestone that I knew-
"Two miles to Dunwich"-now the view
Of distant spire and roofs would dawn
With ten more upward paces gone. . . .

Skyhorse Publishing, under our Night Shade and Talos imprints, is proud to publish a broad range of titles for readers interested in science fiction (space opera, time travel, hard SF, alien invasion, near-future dystopia), fantasy (grimdark, sword and sorcery, contemporary urban fantasy, steampunk, alternative history), and horror (zombies, vampires, and the occult and supernatural), and much more. While not every title we publish becomes a New York Times bestseller, a national bestseller, or a Hugo or Nebula award-winner, we are committed to publishing quality books from a diverse group of authors.
or
Buy Here
(This book is on backorder)
Copyright © 2020 American Booksellers Association