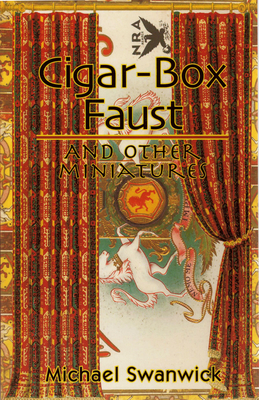 Cigar-Box Faust and Other Miniatures

Often humorous, sometimes chilling, always entertaining, this collection of award-winning author Michael Swanwick's short-short fiction is a work of masterfully sustained whimsy for adults. Cigar-Box Faust contains more than seventy fantastical stories in fewer than a hundred pages. The title piece is a five-minute condensation of a classic of Western literature, featuring a cigar-cutter as Mephistopheles; a box of matches in the roles of Helen of Troy, an Angel of the Lord, and the Light of Ontology; and a cigar as Faust himself. Although it has previously been performed live by the author, this is its first appearance in print. There is also an abecedary showcasing Swanwick's bravura imagination with a separate story for every letter of the alphabet, another set of tales for every planet in the solar system, and a series of pieces that the author literally wrote in his sleep To say nothing of a clutch of alternate autobiographies, a novella of decadence and corporate politics in a future Venice that has been boiled down to 416 words, Picasso and Philip K. Dick as existential heroes...and a rhyme for orange.