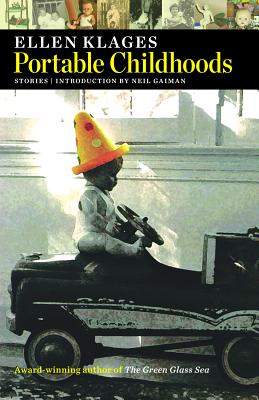 ?Brilliant stories."
--Cory Doctorow, author of Little Brother ?There are so many smart, sweet, funny, troubling treats here about so many things--childhood, chefs, God, barber shops, the atomic bomb--that it's nearly impossible to pick a favorite. Just read them all They're great ?
--Connie Willis, author of To Say Nothing of the Dog This long-awaited first short fiction collection from Scott O'Dell award-winning author Ellen Klages (The Green Glass Sea), offers a tantalizing glimpse of what lies hidden just beyond the ordinary. Described by reviewers as timeless, delightful, chilling, and beautiful, this is short fiction at its best, emerging from a distinctive, powerful voice. Includes the Nebula Award?winning novelette ?Basement Magic" as well as the story that became The Green Glass Sea.

"Consistently well written and emotionally stimulating, the book is one of the loveliest you'll find. . . . Well worth a gander."  School Library Journal

"Energy and nimbleness . . . Klages treads the invisible line between wonder and the mundane with total control."  The New York Review of Science Fiction (NYRSF)

"Highly recommended. I enjoyed each and every story in the collection."  SF Revu

"The kind of sf writer that comes along once in a decade . . . brilliant stories."  boingboing.net


"An amazing collection . . . each of the sixteen stories here is a gem . . . memorable for the clarity, the simplicity, and the power of their writing."  Black Gate

"For queer readers, this book is a real delight . . . for as anyone who’s ever felt different knows, such secrets [are] more a cause for celebration than self-hate."  somefantastic.org

Ellen Klages is the acclaimed author of the Scott O'Dell Award-winner, The Green Glass Sea, and White Sands, Red Menace, which won the California and New Mexico Book awards. Her short fiction has appeared in numerous magazines and anthologies, and has been translated into more than seven languages and republished worldwide. A graduate from the Second City's infamous Improv Program, Klages also holds a degree in philosophy, which led to many randomly-alliterative jobs such as proofreader, photographer, painter, and pinball arcade manager. She lives in San Francisco, in a small house full of strange and wondrous things.
Loading...
or
Not Currently Available for Direct Purchase