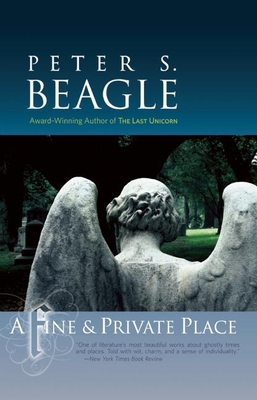 For nineteen years, Jonathan Rebeck has hidden from the world within the confines of the Bronx's Yorkchester Cemetery, making an abandoned mausoleum his secret home. He speaks with the newly dead as they pass from life to wherever spirits finally go, providing them with comfort, an understanding ear, and even the occasional game of chess. But Mr. Rebeck's reclusive life is soon to be disrupted. An impossible love has blossomed between two ghosts at Yorkchester Cemetery, and Rebeck finds himself drawn to a living woman. Helped along by a cynical raven and a mysterious security guard, these four souls must learn the true difference between life and death and make choices that really are forever. Told with an elegiac wisdom, Peter S. Beagle's first novel is a timeless work of fantasy, imbued with hope and wonder. This updated edition contains the author's final revisions and stands as the definitive version of an enduring modern classic.

Peter S. Beagle is the best-selling author of The Last Unicorn, which has sold a reported five million copies since its initial publication in 1968. His other novels include A Fine & Private Place, The Innkeeper's Song, and Tamsin. His short fiction has been collected in four volumes by Tachyon Publications, including The Rhinoceros Who Quoted Nietzsche, The Line Between, We Never Talk About My Brother, and Sleight of Hand. He has won the Hugo, Nebula, Mythopoeic, and Grand Prix de l'Imaginaire awards as well as the World Fantasy Award for Lifetime Achievement.

Praise For A Fine & Private Place…

"One of literature's most beautiful works about ghostly times and places . . . told with wit, charm, and a sense of individuality."  The New York Times Book Review

"Beagle has been compared, not unreasonably, with Lewis Carroll and J. R. R. Tolkein, but he stands squarely and triumphantly on his own feet."  The Saturday Review

"A sweet, sad, and smart novel about life, death and love . . . a book that has endured for a reason."  The Agony Column

"Just as wonderful as I remembered it to be: beautifully written, the characters warmly drawn."  The Magazine of Fantasy and Science Fiction

"One of the great fantasy novels of all time."  ICCFA Magazine (International  Cemetery, Cremation, and Funeral Association)

"I can't think of a better book to buy for someone you love this holiday season."  Omnivoracious.com

"Such compassion and grace that [the book] ends up far more absorbing and moving than most novels."  SF Reviews.net