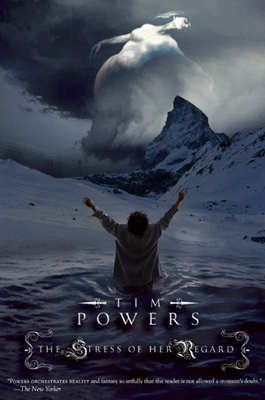 The Stress of Her Regard

World Fantasy Award Winner
Michael Crawford is forced to flee when discovers his bride brutally murdered in their wedding bed. Yet it is not the revengeful townspeople he fears but the deadly embrace of the malignant spirit that is claiming him as her bridegroom.
Crawford will not travel alone; soon he is aided by his fellow victims, the greatest poets of his day?Byron, Keats, and Shelley. Together they embark upon a desperate journey, crisscrossing Europe and battling the vampiric fiend who seeks her ultimate pleasure in their ravaged bodies and imperiled souls.
Telling a secret history of passion and terror, Tim Powers (The Anubis Gates, Declare, Three Days to Never) masterfully recasts the tragic lives of the Romantics into a uniquely frightening tale. Back in print for the first time since 1994, this newly revised edition of The Stress of Her Regard will thrill both Powers fans and newcomers to this gripping Gothic tour de force.

Praise For The Stress of Her Regard…

"Through both innovation and preservation, Tachyon Publications has become one of the most respected publishing houses in speculative fiction."  Hellnotes: Fiction, Movies, and Art Dedicated to the Horror Genre

"Powers has already proved that he is a master of what he terms 'doing card tricks in the dark,' referring to the incredible amount of historical, biographical, and practical research that goes into his works."  Harvard Review

"Powers plots like a demon."  The Village Voice Literary Supplement

"Good serious fantasy doesn't come much better than The Stress Of Her Regard."  Oxford Times

Tim Powers has been compared to Michael Crichton, Neal Stephenson, and Clive Barker and was lauded by Kirkus as ?the reigning king of adult historical fantasy." His novel Declare, a supernatural secret history of post-WWII espionage, won the 2001 World Fantasy and the International Horror Guild awards. He is the two-time recipient of the Philip K. Dick Award for The Anubis Gates and Dinner at Deviant's Palace and a three-time Locus Award winner for Last Call, Expiration Date, and Earthquake Weather. His latest novel, Hide Me Among the Graves, is a sequel to his classic supernatural thriller, The Stress of Her Regard. Powers has taught at the Clarion Science Fiction Writers' Workshop and has co-taught the Writers of the Future Workshop with Algis Budrys.
Loading...
or support indie stores by buying on