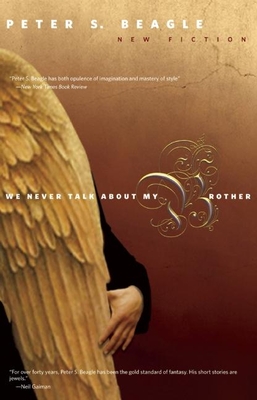 We Never Talk about My Brother

Featuring the Locus Award-winning novelette, "By Moonlight" The extraordinary stories in this new contemporary fantasy collection show a mature, darker side of the author of The Last Unicorn in modern parables of love, death, and transformation shadowed lightly with melancholy. The Angel of Death enjoys newfound celebrity while moonlighting as an anchorman on the network news; King Pelles the Sure, the shortsighted ruler of a gentle realm, betrays himself in dreaming of a "manageable war"; an American librarian discovers that, much to his surprise and sadness, he is also the last living Frenchman; and rivals in a supernatural battle forgo pistols at dawn, choosing instead to duel with dramatic recitations of terrible poetry. Featuring previously unpublished stories alongside recently published classics, this is a lovely, haunting, and wholly satisfying read.

Praise For We Never Talk about My Brother…

"Rooted in rich, thoughtful prose . . . each tale is a beautifully crafted gem, cut and polished to perfection . . . a worthwhile purchase for public libraries where fantasy and short story collections are popular."  Library Journal

"At his best, Peter S. Beagle outshines the moon, the sun, the stars, the entire galaxy."  The Seattle Times

"There is a new Peter Beagle short story collection out. I've twittered about it, but forgot to mention it on the blog. Peter is one of those writers who just seems to be getting better and better, and his short stories are delights.  Neil Gaiman, journal.neilgaiman.com

"For years a loving readership has consulted him as an expert on those hearts' reasons that reason does not know."  Ursula K. Le Guin, author, A Wizard of Earthsea

"Peter S. Beagle [has] rejoined the main flow of literature with a vengeance . . . his work is marvelous."  Green Man Review

Peter S. Beagle is the best-selling author of The Last Unicorn, which has sold a reported five million copies since its initial publication in 1968. His other novels include A Fine & Private Place, The Innkeeper's Song, and Tamsin. His short fiction has been collected in four volumes by Tachyon Publications, including The Rhinoceros Who Quoted Nietzsche, The Line Between, We Never Talk About My Brother, and Sleight of Hand. He has won the Hugo, Nebula, Mythopoeic, and Grand Prix de l'Imaginaire awards as well as the World Fantasy Award for Lifetime Achievement.
Loading...
or
Not Currently Available for Direct Purchase