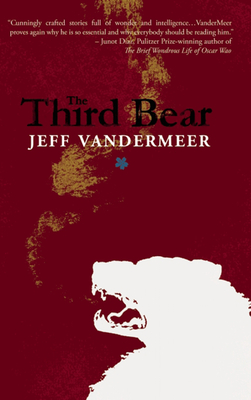 "Cunningly crafted stories full of wonder and intelligence. VanderMeer proves again why he is so essential and why everybody should be reading him."
--Junot Diaz, Pulitzer Prize-winning author of The Brief Wondrous Life of Oscar Wao Featuring "The Situation," a story set in the universe of VanderMeer's bestseller, Borne. Compared by critics to Borges, Nabokov, and Kafka, contemporary fantasist Jeff VanderMeer (The Southern Reach Trilogy) continues to amaze with this surreal, innovative, and absurdist gathering of award-winning short fiction. Exotic beasts and improbable travelers roam restlessly through these darkly diverting and finely honed tales. In "The Situation," a beleaguered office worker creates a child-swallowing manta-ray to be used for educational purposes (once described as Dilbert meets Gormenghast). In "Three Days in a Border Town," a sharpshooter seeks the truth about her husband in an elusive floating city beyond a far-future horizon; "Errata" follows an oddly familiar writer who has marshaled a penguin, a shaman, and two pearl-handled pistols with which to plot the end of the world. Also included are two stories original to this collection, including "The Quickening," in which a lonely child is torn between familial obligation and loyalty to a maligned talking rabbit. Chimerical and hypnotic, VanderMeer leads readers into a new literature of the imagination.

Praise For The Third Bear…

"A fine introduction to one of our very best contemporary practitioners of the fantastic."  Publishers Weekly

"VanderMeer proves again why he is so essential and why everybody should be reading him."   Junot Diaz, Pulitzer Prize-winning author, The Brief Wondrous Life of Oscar Wao

One of the things that sets VanderMeer apart is his embrace of technology and media. His online presence is considerable and includes a number of web sites, frequent blogging, a short film adaptation of his novel Shriek (including collaboration with pop rock band The Church), his Alien Baby photo project and even a project involving animation via Sony Playstation.” Wired.com

"Jeff Vandermeer is not to be trusted. He hypnotizes with shiny objects, bizarrely beautiful shapes and phrases, then (more often than not) gently drifts you into very dark places. You won't know where you're going till you get there and then, of course, it's too late."  Mike Mignola, creator, Hellboy

"In the hands of a brilliant writer like Jeff VanderMeer, writing fantasy can be a means of serious artistic expression. . . . It is also playful, poignant, and utterly, wildly imaginative."  Peter Straub, author, The Talisman

"Fascinating . . . the harmonics between the stories cross all sorts of boundaries."  Locus Magazine

"Jeff VanderMeer is an extraordinary writer . . . passionate, beautiful, complex, terrifying."  Tamar Yellin, author, The Genizah at the House of Shepher

World Fantasy and Nebula Award-winning author Jeff VanderMeer is the New York Times bestselling author of The Southern Reach Trilogy, Borne, City of Saints and Madmen, Finch, and Booklife. A film of the first book in the Southern Reach Trilogy, Annihilation, will be released as a science fiction thriller starring Natalie Portman and Oscar Isaac. VanderMeer's fiction has been translated into more than twenty languages and his novels have appeared in numerous year's best lists including Publishers Weekly, Verge, and the Wall Street Journal. His nonfiction and reviews have appeared in Washington Post Book World, the Huffington Post, the Guardian and the New York Times Book Review. He is also the editor of numerous canonic anthologies such as The New Weird and the Steampunk series, co-edited by his spouse, Ann VanderMeer. Vandermeer grew up in Fiji and lives in Tallahasse, Florida.
Loading...
or support indie stores by buying on
(This book is on backorder)