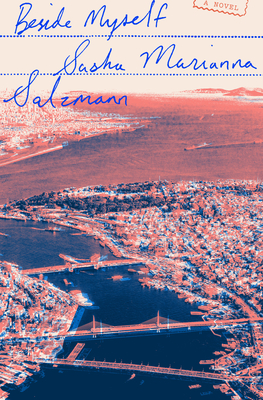 A brilliant literary debut about belonging, family, and love, and the enigmatic nature of identity.

Beside Myself is the disturbing and exhilarating story of a family across four generations. At its heart is a twin’s search for her brother. When Anton goes missing and the only clue is a postcard sent from Istanbul, Ali leaves her life in Berlin to find him. Without her twin, the sharer of her memories and the mirror of her own self, Ali is lost.

In a city steeped in political and social upheaval, where you can buy gender-changing drugs on the street, Ali’s search—for her missing brother, for her identity—will take her on a journey for connection and belonging.

Sasha Marianna Salzmann is a playwright, essayist, curator, and writer in residence of the Maxim Gorki Theater in Berlin. They are a cofounder of the culture magazine freitext and were the artistic director of Studio Я from 2013 to 2015. They also cofounded NIDS – New Institute for Drama, where they give workshops on political writing. Their work has been translated, performed, and bestowed awards in more than twenty countries. Their first novel, Beside Myself, won the Mara Cassens Prize and the Jürgen Ponto-Stiftung Prize for best debut novel, was short-listed for the 2017 German Book Prize, and has been translated into fifteen languages.

Imogen Taylor studied French and German at New College, Oxford, and the Humboldt University in Berlin. She is the translator of Sascha Arango, Dirk Kurbjuweit, and Melanie Raabe, among others. In March 2016 she received the Goethe-Institut Award for New Translations.

Praise For Beside Myself: A Novel…

“[Beside Myself] challenges the idea of fixed, immutable identities and whether they are even worth having…A melancholic matryoshka doll of stories within stories spanning four generations of family, the novel is an exploration of the in-between.” —Playboy

“A compelling journey of discovery and change.” —Booklist

“Salzmann thoughtfully and cleverly addresses the themes of memory, identity, and migration, asking if language, nationality, or gender are important for our self-definition…[an] at times quirky, at times graphic tale of lost and found.” —World Literature Today

“Fiction at its highest purpose…Beside Myself reads like a classic and is yet refreshingly modern…[It] beautifully interweaves four generations of characters of different ages, times, places, languages and genders.” —ArtsHub

“Salzmann’s brisk storytelling builds into a sort of brilliant literary labyrinth, one where the sanctuary of belonging remains an elusive, transient, and constantly evolving thing.” —The Age

“Beautifully written despite the darkness of its story and texture. There are hundreds of glimpses of worlds inside worlds…Beside Myself is both a cool thriller and a meditation on family.” —Saturday Paper

“Expertly translated from the original German, [Beside Myself] conjures up emotions, sights, sounds, and tastes in breathtaking detail.” —Adelaide Advertiser

“Exciting and enriching…Beside Myself is a book that requires work but it is work worth being lost in.” —Lifted Brow
or support indie stores by buying on
Copyright © 2020 American Booksellers Association