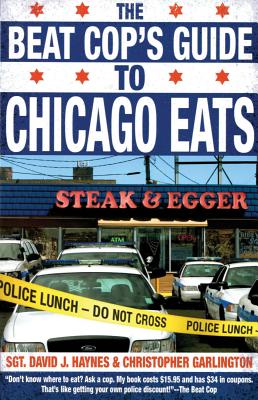 When the Beat Cop pauses from taking a bite out of crime, he takes a bite out of donuts, polish sausage, fried chicken, enchiladas, and omelettes

Now, Sgt. David J. Haynes of the Chicago Police Department, and his partner-in-crime, humorist and blogger Christopher Garlington, want to take on Foley's street-level guide to the best mom-and-pop food bargains in Chicago with their follow-up: "The Beat Cop's Guide to Chicago Eats": "We're funnier, better-looking, and have the street smarts, girth, and weaponry to meet him in any alley, taqueria, or rib joint.

Praise For The Beat Cop's Guide to Chicago Eats…

“A tremendous book. This is the greatest book I’ve seen all year.”  —Bob Sirott, Fox TV

“Any reviewer can name the top restaurants downtown, but can they tell you where to get an honest-to-goodness satisfying meal for ten dollars or less in every corner of Chicago?”  —Windy Citizen

“If you’re looking for something fast and inexpensive, your best bet may be turning to your neighborhood police officer.”  —WCIU TV