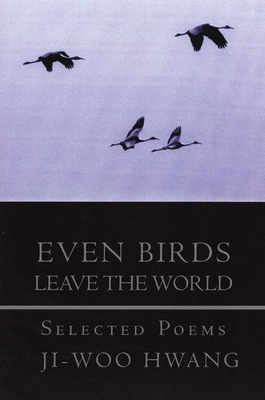 Even Birds Leave the World

Ji-Woo Hwang's poems describe a life governed by the inescapable reality that all hell may break loose at any time, a reality that now permeates our own culture. His poems mix lyrical intensity with an acute political sensibility, creating an uneasy tension that makes them by turns moving, humorous, and unnerving.

Ji-Woo Hwang has since written seven books of poetry.

Ji-Woo Hwang was born in 1952 and studied aesthetics and philosophy at college in the early 70's. He began to publish poems in 1980 and has since written seven books of poetry. For his work, Hwang has received many of Korea's most prestigious literary awards. Won-Chung Kim is a professor of English Literature at Sungkyunkwan University in Seoul, Korea. He is the co-translator of Heart's Agony by Chiha Kim and is currently translatiing an anthology of Korean nature poets. Christopher Merrill has published four collection of poetry, including Watch Fire and is the author of several books of non-fiction inclusing the recent, Things of a Hidden God: Journey to the Holy Mountain. He has translated work from several languages and his works include Anxious Moments by Ales Debeljak. He directs the International Writing Program at the University of Iowa.
Loading...
or support indie stores by buying on