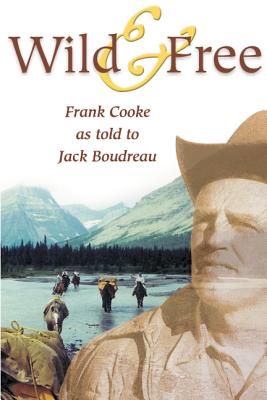 Jack Boudreau, author of the bestselling Crazy Man's Creek and Grizzly Bear Mountain, is back with another wild and wooly, scarcely believable but nevertheless true tale of misadventure in British Columbia's northern wilderness. Wild and Free, which Boudreau says is his best book yet, tells the stories of two of Canada's most legendary mountain men--Skook Davidson (who actually has a mountain named after him) and Frank Cooke. Readers of Edward Hoagland's 1966 classic, Notes from the Century Before, will remember Skook Davidson as the "cranky old man, crippled up with arthritis, cussing into his radio, who gives a report on his wolves instead of his weather, and throws the cork into the creek when he opens a bottle of whiskey so there won't be a way of stopping the fun." In Wild and Free the fun rolls on for 240 pages as author Boudreau falls in with Davidson's long-time protege, Frank Cooke, (now 77) and together they reconstruct the old buzzard's memorable life.

Davidson came into the remote Kechika valley in northernmost BC as horse packer for the early surveyors, and chose to remain, surrounded only by his own feral horses and the wolves that he found to be congenial enough neighbors. He carved a horse ranch out of some of the world's most isolated wilderness and supplied guiding, packing and entertainment for virtually everyone who ventured into the region for the next forty years. Cooke was the 17-year-old son of a Prince George policeman when he came to the attention of the authorities after he and a couple buddies decided to hang their teacher. "They didn't kill him or anything but they made his face turn black and his tongue stuck out," says Boudreau. "They said he was a far nicer guy after that." Frank's father decided to forestall further such experiments by sending him about as far out in the bush as it was possible to go, apprenticing him to Skook's guiding and outfitting business in the faraway Nechika Valley. Skook had his own ways of handling youthful boisterousness. Once when Frank was roughhousing with one of the other hands, Skook sent them out into the 40-below night to work their steam off on the frozen woodpile. They decided to get back at the old man by stuffing a gunnysack down the chimney and smoking him out, but he caught on and took after them with his shotgun, showering them with birdshot as they dove for cover. When Skook left off, they scuttled back to the woodpile and chopped away half the night before he finally let them come in to thaw out. Frank survived Skook's version of tough love and in time bought half his guide line. He became almost as legendary among the world's outdoorsmen as his mentor, guiding the Prince of Iran, Governor John Connolly of Texas and innumerable other celebrities.


Praise For Wild and Free…

"Caitlin Press has a true dedication in keeping the history of Northern B.C. alive…Jack Boudreau has given us a chance to revisit the lives of these rugged backwoods cowboys in ways we would not otherwise be exposed to." — Judith Schweers, Daily News

Jack Boudreau was born in the small community of Penny, BC. He has devoted his professional life to British Columbia's forest industry working as a licensed scaler, industrial first-aid attendant and forest fire fighter mostly with the Ministry of Forests. From early childhood he has been an avid lover of the outdoors. He is a mountain climber, fisher and skier. Boudreau is the author of five bestsellers - 'Sternwheelers and Canyon Cats, Crazy Man's Creek, Grizzly Bear Mountain, Wilderness Dreams' and 'Mountains, Campfires and Memories'. He now lives in Prince George, BC, where he spends his time writing about the early settlers and homesteaders of BC.
Loading...
or
Not Currently Available for Direct Purchase