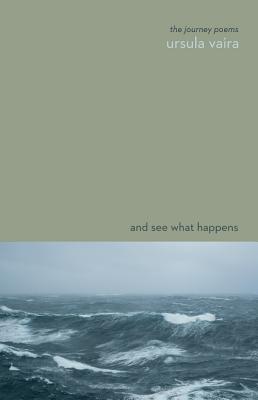 And See What Happens (Paperback)

In her first book of poetry, Ursula Vaira captures the rugged and challenging beauty of the West Coast landscape in three poignant stories.

The first, told through a set of linked poems, describes her thirty-day, thousand-mile paddle from Hazelton to Victoria with skipper Roy Henry Vickers. "Journeys 97" was an RCMP-First Nations venture to raise addictions awareness and to offer on opportunity for the government to apologize for their role in the legacy of the residential schools. Vaira bears witness.

A heck of a wind/ bounces me into the mountains ... So begins the second poem, "Frog River," the story of a woman's stay in an isolated hunter's cabin 129 km north of Muncho Lake in the northern Rockies. She is not sure whether she has left her lover or just left him behind, whether love is more dangerous than anything she might encounter in the wilderness.

"Last One to Get There," the third and final journey in Vaira's new collection, is a poem of place, of landscape and of West Coast imagery from a twenty-two-day kayaking journey that rounded Cape Scott and Cape Cook on Vancouver Island.

Lorna Crozier has called these poems "talismans of grace, beauty and healing."

Ursula Vaira's poems have been published in literary journals and in anthologies. The long poem, "Frog River," was published as a chapbook and is forthcoming in the Portage Anthology. The title poem of her collection, "And See What Happens," was a finalist in the CBC Literary Competition and was published in slightly different form as a chapbook called 'A Thousand Miles'. "Last One to Get There" was published in a chapbook titled 'Little Espinoza'. Ursula worked at Oolichan Books for ten years then founded her own publishing house, Leaf Press, in 2001.

Praise For And See What Happens: The Journey Poems…

"John Berger writes that poetry is closer to prayer than it is to prose. These poems are proof of that. Without shirking the shameful history of the province, they become talismans of grace, beauty and healing. Go on this journey with Ursula Vaira. You’ll find yourself falling into the sky." — Lorna Crozier

"To share the three journeys of this volume of poems with Ursula Vaira is a rare treat indeed … 'A stone softened in the mouth/will speak,' Vaira tells us. Her poems are as eloquent as softened stones." — Glen Sorestad

"Ursula Vaira’s And See What Happens: The Journey Poems offers three stories of journeys. The first, 'And See What Happens,' recounts in various forms Vaira’s participation in 'Journeys ’97,' an RCMP-First Nations 1000-mile paddle from Hazelton, B.C., to Victoria. Led by Roy Henry Vickers, the journey’s purpose was to apologize to First Nations communities for the tragic legacy of residential schools and to raise awareness of the problem of addictions. Vaira, a Caucasian civilian, was the only woman taking part. These poems combine sorrow and a gentle humour to delineate the tragedies of the past and their ongoing grievous effects. In 'Teacher, visionary, healer, warrior,' a prose poem, Vaira pays homage to Vickers, who 'dreamed of joining the RCMP but was turned down because he was colour-blind. So, he became an artist.' This poem also points out that most policing in Canada is in response to the consequences of addictions, so Vickers’ dream of having an addictions recovery centre for addicts of any background makes sense. The first journey has several light moments. In 'How many embraces can a humble man endure?' Vaira describes the dismay some residential-school survivors have when the group lands, the dancing (the police paddlers are called 'Butterflies' as they have no nation), and then the tears of the officers, who 'are completely undone.' The light comes in with the children who have 'sweet-talked [the RCMP] / into letting them wear their Stetsons. / Trays of dessert come around, and come around / and come around again, offered by children / who will not take no for an answer.' The balance is exquisite. The second journey is called 'Frog River,' where, in seventeen ghazals, Vaira describes the trip and an emotional separation. She is on the river; her partner is at home. She stays in a basic cabin in cold weather, and the physical challenge of being in the wilderness mirrors the challenge of love. The poems ask which experience is more dangerous. In 'VII,' she notes: 'I fish all day for one fish. / I am learning the meaning of desire.' Because of the two-line stanzas, the form juxtaposes the issues in the speaker’s life—the physical survival and the emotional. The third journey, 'Last One to Get There,' is about kayaking for twenty-two days around the north end of Vancouver Island. All the poems (with place names for titles) have seven lines except 'Goletas,' about missing a pod of whales. Vaira combines form and content beautifully, and her similes are splendid: 'Once again we paddle along shore like ducklings following Glenn.'" — The Malahat Review
or support indie stores by buying on
Copyright © 2020 American Booksellers Association