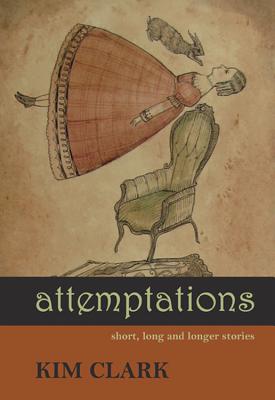 Imagine you're given the startling news that your body is only capable of having six more orgasms. "It's either buck up or fuck up," decides Mel in "Six Degrees of Altered Sensation," adding this new restraint to the perplexity of single life with progressive Multiple Sclerosis. In "Flickering," Francis becomes a pyromaniac in order to give her grown sons the opportunity to become heroes. Mundane directions for propane use parallel a brief sizzling affair in "Dick & Jane & the Barbecue and No, It's Not a Love Story."

Altered and twisted realities make the impossible possible for Clark's characters. Lillian, an arthritic senior in "Solitaire," discovers the rejuvenating properties of the bones of her lively, young new neighbour. Looming dementia is replaced by ravenous desire. In "Split Ends" a woman finds a book that contains her own memories, but it is written by a stranger with the same name; in "No U's," a woman slips away through the mail slot to escape her stagnant life.

Ranging from micro-fiction to near maxi-fiction, the stories in Attemptations are peopled by women, often physically challenged women--darkly humorous, feisty, sexy, manic, persevering, observant, contemplative women. These characters will snag you and hold you there 'til they're good and done.

Kim Clark lives on Vancouver Island. Disease and desire, mothering and the mundane propel her ongoing journey between poetry and prose. Kim's work can be found in 'Body Breakdowns' (Anvil Press), the 'Malahat Review', e-zines and other publications in Canada and the US. She was a 2010 winner in the 'scratch' Poetry and Fiction Contests and was short-listed in the 'Malahat Review' 2010 Novella Contest. Kim holdsa BA in Creative Writing from Vancouver Island University and has edited for 'Artistry' and 'Portal'. Her first book was 'Attemptations' (Caitlin, 2011).

"The writing is refreshing and far from ordinary even while describing ordinary events. Clark, who is also a poet, appears to delight in her own word wizardry and readers get to share in that delight. … Quirky, darkly humorous and not quickly forgotten." — Story Circle Book Reviews

"With a punctuated style and tone similar to Carolyn Black’s The Odious Child, Kim Clark’s stories offer up a darker slice of individuality. Her characters are universally flawed, often with physical manifestations to their idiosyncrasies. Often times employing an extraneous narrative mechanic (barbeque instructions, medical terminology, and repetitive—and manipulative—nomenclature), the stories in Attemptations are quite deliberately structured; Clark’s writing is organized and neat, leaving little to chance." — Andrew Wilmot, backlisted.
or
Not Currently Available for Direct Purchase
Copyright © 2020 American Booksellers Association