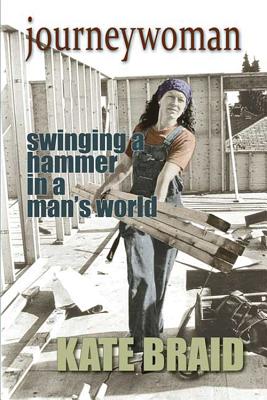 Swinging a Hammer in a Man's World

Since women started working in the trades in the 1970s, very little has been published about their experiences. In this provocative and important book, Kate Braid tells the story of how she became a carpenter in the face of skepticism and discouragement.

In 1977 when Braid was broke and out of work, her male friends encouraged her to apply as a labourer on a construction site on Pender Island, off the coast of British Columbia. She'd never heard of a woman doing this kind of work, but she was hired because (she later found out) the boss hoped that a woman onsite would improve the men's performance. For the next fifteen years Braid worked as a labourer, apprentice and journeywoman carpenter, building houses, bridges and high-rises. She was one of the first qualified women carpenters in British Columbia, the first woman to join the Vancouver local of the Carpenters' Union, the first to teach construction full-time at the BC Institute of Technology and one of the first women to run her own construction company. Though she loved the work, it was not an easy career choice but slowly she carved a role for herself, asking first herself, then those who would challenge her, why shouldn't a woman be a carpenter?

Told with humour, compassion and courage, Journey Woman is the true story of a groundbreaking woman finding success in a male-dominated field.

Kate Braid worked as a receptionist, secretary, teacher’s aide, lumber piler, construction labourer, apprentice and journey-carpenter before finally “settling down”* as a teacher. She has taught construction and creative writing, the latter in workshops and also at SFU, UBC and for ten years at Vancouver Island University (previously Malaspina University-College). She is the author of A Well-Mannered Storm: The Glenn Gould Poems, Covering Rough Ground, To This Cedar Fountain and Inward to the Bones: Georgia O’Keeffe’s Journey with Emily Carr. In 2005 she co-edited, with Sandy Shreve, In Fine Form: The Canadian Book of Form Poetry. Braid’s second book of poems about her carpentry experiences, Turning Left to the Ladies, was published by Palimpsest Press. She lives in Burnaby, BC, with her partner.

Praise For Journeywoman: Swinging a Hammer in a Man's World…

"Braid’s story … is a page-turner … Her detailed journals helped her recreate conversations and map her journey from happenstance labourer to intentional journey woman carpenter. Her evolving feminist politics form a thread throughout her narrative and will resonate with anyone who has experienced aha moments of political consciousness." — Herizons

"…Braid’s honest and open writing will have every reader laughing, crying, cringing and cheering right along with her." — Geist

"So inspiring. Beautiful, compelling writing … It taught me so much. A wonderful, life-altering book." — Joy Kogawa, author of Obasan, The Rain Ascends, Itsuka, Naomi’s Road, Naomi’s Tree and Emily Kato. Holder of the Order of Canada, Order of BC and Order of the Rising Sun (Japan)

"I read Journeywoman with fascination. It is honest, authentic and beautiful; a really important accomplishment!" — Marylin Bowering, Finalist for the Orange Prize. Winner of the Dorothy Livesay Award and Pat Lowther Award, Gwendolyn MacEwen and Ethel Wilson Fiction prizes, and two-time nominee for the Governor General’s Literary Award

"Journeywoman should be in every tradeswoman’s tool library because it’s more than a book. It’s a pickup truck full of the fire, muscle and passion of a woman who’s not afraid to bare her soul and her private life just as forcefully and true as her hammer strikes. Kate is no visitor to life or construction sites. She documents both with brave humor, love, energy and enthusiasm. I didn’t want this book to end." — Sue Doro, railway worker and editor of Pride and Paycheck

"Your carpentry book was a reflection of my feelings. You were able to explain the aloneness and the pride of being a 'carpenteress.' You gave me solace that through sinew and sawdust, the brilliance of building was an addiction not lost to all women … Thank you for the honesty.  Morning comes quick when you can’t put a book down." — Kaitlin Murphy, carpenter

"…this book will strike a shord with each and every reader." — Valerie Overend, Our Times magazine