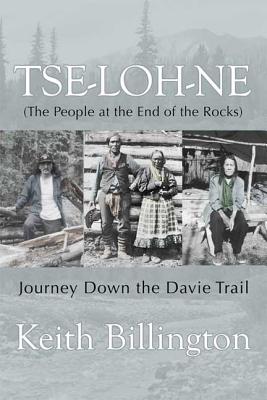 Journey Down the Davie Trail

The Tse-loh-ne from the Sekani First Nation were known as "The People at the End of the Rocks." This small band of people lived and thrived in one of BC's most challenging and remote areas, 1600 kilometres north of Prince George in the Rocky Mountain Trench. They were isolated and nomadic, and survived by following the seasons, walking hundreds of kilometres each year, hunting and harvesting food as they travelled.

In 1988, Keith Billington, a former outpost nurse in the Northwest Territories, worked as the band manager for the isolated Sekani Indian Band at Fort Ware. In addition to his role as an administrator, he performed dental work, sutured victims of violence, delivered babies that wouldn't wait and prepared deceased persons for burial. Several years into his new job, Billington was invited on a traditional Sekani trek. The travellers would follow the Aatse Davie Trail using pack dogs, traversing 460 kilometres in some of BC's roughest terrain. Like the Tse-loh-ne before them, they carried little food, relying instead on what they could hunt or gather.

Throughout the twenty-five days it took the party to hike from Lower Post to Fort Ware, Keith and his companions suffered cold, starvation and injury. They faced grizzly bears, swollen rivers and the incessant rain so typical of northern BC. Their adventures offer a poignant glimpse into the hardships and rigours of the Sekani people, who have one foot in their past and the other in their future--a people who reluctantly try to adapt to today's values knowing that change is inevitable.

A registered nurse from England, Keith Billington emigrated to Canada and worked in the Canadian Arctic for six years with his wife, Muriel, who is a nurse-midwife. Keith obtained his Public Health Nurse Diploma at Dalhousie University in Halifax, Nova Scotia. Since retiring, Keith and his wife continue to travel in winter by snowmobile and skis, and in the summertime they find adventure in their double seagoing kayak. His previous books are 'House Calls by Dogsled' (Harbour Publishing, 2008) and 'Cold Land, Warm Hearts' (Harbour Publishing, 2010).

Praise For Tse-loh-ne (The People at the End of the Rocks): Journey Down the Davie Trail…

"This book is well-illustrated with archival and contemporary photographs of the people mentioned, and it also offers a map showing Sekani territory. Caitlin Press has a distinguished record of publishing authors with intimate knowledge of people and places in British Columbia … The book is a good read as well as an important contribution to BC First Nations history." — BC Studies