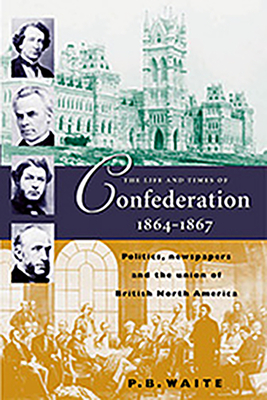 Politics, Newsapers and the Union of British North America

P.B. Waite's book on the events leading to the 1867 Confederation of British North American colonies has long been regarded as one of the best, and liveliest, on the subject. Newspapers were a transcript of life and society. More than mere observers of political events, they were participants with close connections to politicians, shaping public opinion according to their competing views. Public opinion, especially in the eastern colonies, was divided about whether Confederation was desirable, and even more so about what form it should take. Was the federation devised at Charlottetown and Quebec the best arrangement for a union? Certain it is that on July 1, 1867, the Province of Canada (today's Ontario and Quebec) and New Brunswick and Nova Scotia were united to form a new nation, soon to be joined by the Northwest, British Columbia and Prince Edward Island, creating the Dominion of Canada.

P.B. Waite is professor emeritus of history at Dalhousie University, Halifax, and a leading historian of the Canadian Confederation period. He is a former president of the Canadian Historical Association and former chairman of the Humanities Research Council of Canada. His previous books include The Confederation Debates in the Province of Canada and Canada 1874-1896: Arduous Destiny.
Loading...
or
Not Currently Available for Direct Purchase