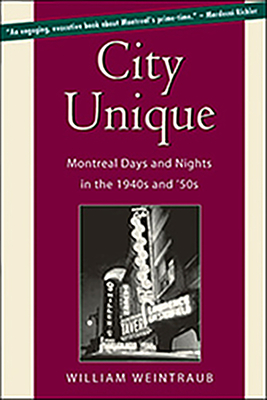 Montreal in the 1940s and '50s was Canada's largest, most vibrant and colorful city. No one could foresee that political and economic factors would cripple the city and send it into a long decline. William Weintraub, writing with insight and affection, brings the Montreal of his youth vividly, entertainingly and wittily to life in this remarkable book.The Montreal he describes was a city with two communities, English and French, who lived separate lives. They met along the dividing line that was The Main - St. Lawrence Boulevard and the nearby streets, where gambling joints, bordellos and night clubs prospered, and where striptease artiste Lili St. Cyr became the toast of the town and gangsters raked in profits while the police looked the other way. It was the Montreal of the colorful, charismatic mayor Camillien Houde within the repressive and corrupt Quebec of premier Maurice Duplessis.William Weintraub looks at all aspects of life in Montreal in what Mordecai Richler called an engaging, evocative book about Montreal's prime-time.

William Weintraub was born in Montreal and worked there during the 1940s and '50s as a reporter for the Gazette and writer/editor for Weekend Magazine. As writer, director and producer with the National Film Board, he was involved in 150 films. He has written two comic novels and a memoir of his early days as a writer, Getting Started.
Loading...
or support indie stores by buying on