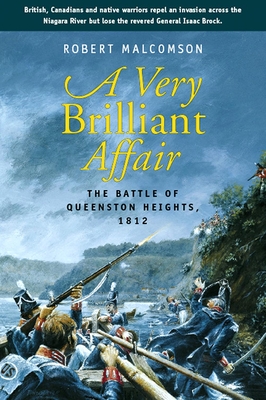 The Battle of Queenston Heights, 1812

As summer turned to fall in 1812, two armies watched each other warily across the turbulent Niagara River that formed the border between the United States and British Canada. On the American side, regular soldiers and state ­militia trained under the inexperienced, ­politically-­appointed General Stephen Van Rensselaer, while on the British side General Isaac Brock worried about defending his long frontier with a meager force of regulars and militia and a group of native warriors about whom he held serious doubts.This is, surprisingly, the first full-length study of the Battle of Queenston Heights. We see the American government stumble into war and send a weakly supplied force to invade across the Niagara River. We follow the battle through the eyes of participants: Jared Willson wonders if he is going to become a cold Yankee, and the Canadian Archie McLean ignores orders by running to the fight with his friend John Beverley Robinson. Winfield Scott strides across the field in full dress Chapeau and plume, and John Norton exhorts his warriors with Come forward whoever hold a manly heart! Artillery Captain William Holcroft retakes Queenston and writes, His Majesty's arms gained a complete victory over those of the United States yesterday in a very brilliant affair.The battle was a sharp lesson for the young U.S. Army and its political masters in Washington and a critical morale booster in Upper Canada. The death of Brock led to an outpouring of grief among Canadians and an impressive monu­ment was raised in his name.This new look at the battle tackles many of the myths that have grown over the years. Was Brock the hero of the day? Was this a victory for the Canadian militia? Were the oft-­maligned New York militia responsible for their army's ­defeat? What was the role of the native allies of the British? Could the American invading force have won?Robert Malcomson's exciting and readable account will add a new level of appreciation for the drama and significance of the War of 1812.

Praise For A Very Brilliant Affair: The Battle of Queenston Heights, 1812…

"Malcomson, writing with clarity and compassion, presents a full and balanced account of the affair ... a pleasure to read and a joy to hold." — The Beaver

The late Robert Malcomson was a leading expert on the War of 1812 and the Age of Sail on the Great Lakes and the author of several books, including Lords of the Lake: The Naval War on Lake Ontario, 1812-1814 and A Very Brilliant Affair: The Battle of Queenston Heights, 1812.
Loading...
or
Not Currently Available for Direct Purchase