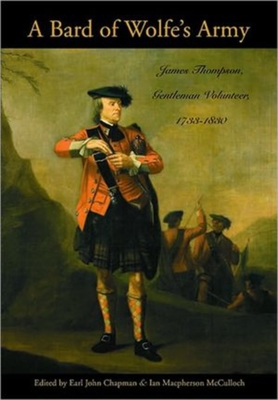 A Bard of Wolfe's Army HC

As a young grenadier in His Majesty's 78th Regiment of Foot (Fraser's Highlanders), Sergeant James Thompson took part in the capture of Louisbourg, 1758, the battle of the Plains of Abraham at Quebec, 1759, and the battle of Sillery, 1760. Later he experienced the American blockade of Quebec by Generals Richard Montgomery and Benedict Arnold during the Revolutionary War. Thompson remained in Quebec the rest of his life. His anecdotes form one of the most interesting personal accounts of soldiering during the Seven Years' War, and his journal offers a first-hand view of life in Quebec in the years that followed. An astute observer with an eye for a humorous story, by the time he reached old age he was sought out by governors general and royalty to recount his stories of earlier times.Editors Earl Chapman and Ian McCulloch not only present Thompson's anecdotes in one volume for the first time, but they also present a wealth of explanation and historical background to bring the period to life and place Thompson's experiences in context.

Earl Chapman is historian of the 78th Fraser Highlanders, a ceremonial regiment perpetuating the history of the old 78th Regiment of Foot. He won the 2008 Gordon Atkinson Memorial Prize in Highland Military History. Ian McCulloch is a Canadian Forces officer and historian specializing in the Seven Years' War. He too won the Gordon Atkinson Prize, in 2009.
Loading...
or
Not Currently Available for Direct Purchase