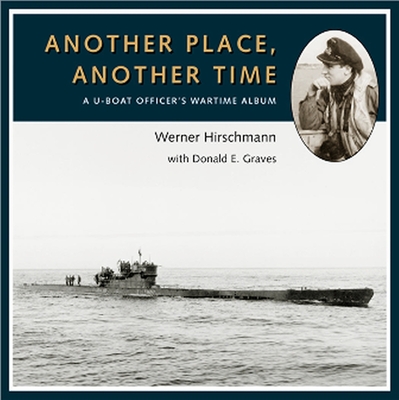 Another Place, Another Time

As a boy growing up in Germany, Werner Hirschmann dreamed of going to sea. In 1940, he was accepted as an officer cadet in the Kriegsmarine, the German navy, and after rigorous training became an engineer officer in the elite U-Boot-Waffe or submarine service.

Using his wartime diaries and remarkable photograph albums, as well as historical documents, Werner Hirschmann recounts the many interesting episodes in his naval career, including serving on a destroyer that escorted Bismarck on her last operation, U-boat operations in the Atlantic and Mediterranean, being besieged by the Americans at the U-boat base at Lorient in France, and his last patrol to North America in 1945, on which his submarine, U-190, sank HMCS Esquimalt, the last Canadian warship lost during the war.

Hirschmann provides a unique view of the day-to-day life of a U-boat officer who, like young men on both sides, did his best to enjoy life while trying to do his duty. An epilogue describes his postwar life as a prisoner-of-war in Canada and Britain. After the war, he moved to Canada, where he pursued a successful career and eventually became an honorary member of the veterans’ association of HMCS Esquimalt.

A key feature for many readers is the technical section that provides a detailed pictorial tour of the Type IX/C40 U-boat, including many previously unpublished photographs discovered in Canadian archives.

This paperback edition is printed on the same high-quality paper as the original hardcover to ensure the best reproduction of the many superb photos.

Praise For Another Place, Another Time: A U-boat Officer's Wartime Album…

“This is not ‘another book about U-boats.’ This is a unique book, bullied from Hirschmann some 55 years after the time described, about a German submariner and it is a delight to read.” — The Naval Review


“When studying the U-boat war, we tend to forget that the sailors involved had families, girlfriends, wives, and children on the home front. Trying to maintain some semblance of normalcy amidst increasing decay in Germany was daunting, yet Hirschmann puts a very human face on all that was happening. He likely would have remained invisible to history save for the efforts of Donald Graves. … Future generations will be grateful. Unfortunately, this book will never be as celebrated as Iron Coffins – but that is almost the brilliance of it. Hirschman takes a decidedly low-key theme in relating his wartime adventures, and that makes it easy to connect with what he is saying. He is not over-the-top in describing U-boat warfare, in fact he stresses the weeks and weeks of monotony, which more than offset the combat the boat saw. The book flows extremely well, and is richly illustrated with photos from the author’s personal collection that do a wonderful job of bringing to life his time as a U-boat engineer.… Highly, highly recommended.” — uboat.net

Donald E. Graves, one of Canada's best known military historians, is the -author or editor of 20 books primarily on the War of 1812 and the Second World War. His studies on the battles of Lundy's Lane (Where Right and Glory Lead!) and Crysler's Farm (Field of Glory) are established classics of musket-period warfare. Born in Düsseldorf in 1923, Werner Hirschmann served in the Second World War as an engineer officer on U-boats. After his submarine surrendered to the ­Canadian navy in 1945, he spent a period in Canada and Britain as a prisoner-of-war before being repatriated to Germany. In the 1950s he emigrated to Canada and pursued a career in the computer business. He lives in Toronto, where he is a keen sailor, a member of the Naval Officers’ Association of Canada and an honorary member of the veterans’ association of HMCS Esquimalt, the warship his U-boat sank.