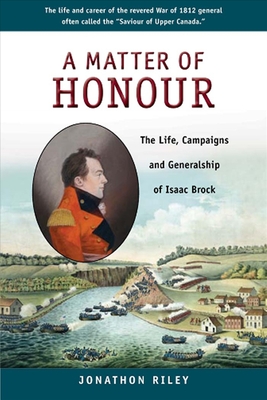 A Matter of Honour

The Life, Campaigns and Generalship of Isaac Brock

Isaac Brock was the British general responsible for defending the long frontier of Upper Canada with meagre forces in the opening days of the War of 1812 between Britain and the U.S.A. He has been revered as the Savior of Upper Canada. Brock was a resourceful field commander who believed in offensive measures to keep his opponent off-balance and is probably best known in the United States for managing to cow U.S. General William Hull into surrendering Detroit, to that general's eternal shame. Jonathon Riley describes Brock's early days in the Channel Islands and his military career in Europe and the West Indies. He covers in detail how Brock prepared for war with the United States, the events of the capture of Detroit as well as the Battle of Queenston Heights, which cost Brock his life but from which he emerged as a major historical figure. The book includes an assessment of Brock's abilities as a general by an author who is himself a general with experience in various theaters of war.

Lieutenant-General Jonathon Riley, CB, DSO, PhD, MA is Master of the Armouries, responsible for the Royal Armouries collection of arms, armour and artillery at the Tower of London. He spent 36 years in the British army, latterly as Deputy Commander of NATO ISAF in Afghanistan. Before that he held military commands in the Balkans, Sierra Leone and Iraq.
Loading...
or
Not Currently Available for Direct Purchase