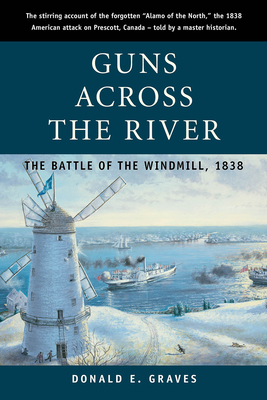 Guns Across the River

In 1838, seeing political turbulence in Canada as an opportunity, a clandestine American organization, the Patriot Hunters, launched a series of attacks across the border. The Hunters hoped to duplicate the success of the Texas rebellion two years before when Davy Crockett and Jim Bowie fought to establish a republic in northern Mexico. Detesting “tyranny and oppression wherever manifested,” they believed that all it would take was “a good stand maintained for a short time” and Canadians would rally to their standard and throw off the British yoke.

The most ambitious Hunter attack was launched in November 1838 when more than 500 armed men, commanded by a European soldier of fortune, set off from northern New York down the St. Lawrence River in a flotilla of chartered and hijacked vessels and occupied a stone windmill near Prescott, Ontario. Their hopes were doomed. After five days of heavy fighting, British regulars and Canadian militia captured this “Alamo of the North,” and those invaders who survived were imprisoned in Fort Henry at Kingston and tried by a court martial – eleven were executed and sixty deported to an Australian penal colony.

The Patriot Hunters’ invasion resulted in nothing but destruction and loss of life, and their only memorial is the stone windmill, today a historic site, beside the St. Lawrence River.

Donald E. Graves tells the full story of this bloody but forgotten military action and the undeclared war of which it was a part. This book is packed with fascinating information about a colourful time in North American history and about the men who fought at the windmill – their personalities, tactics, weapons, uniforms, and even the songs they sang.